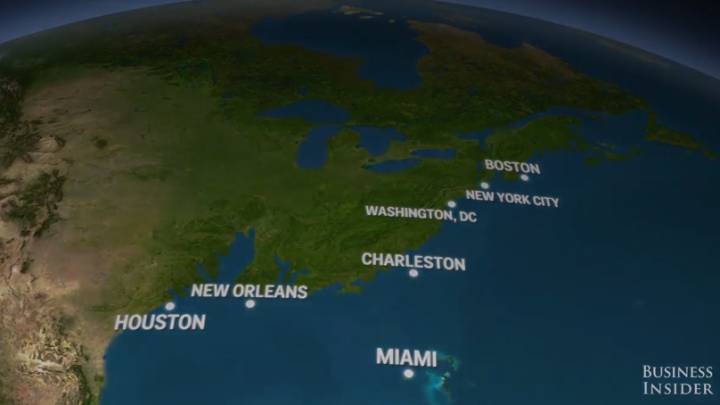 Some say global warming isn’t a real phenomenon, yet 2015 is the hottest year yet — at least since humans began measuring temperatures. The increased heat directly impacts glaciers, among other things, which are melting at an alarmingly fast rate, so sea levels keep rising in the process.

According to a Business Insider video, researchers have shown that last year, west Antartic glaciers retreated past the point of no return, making the ice melt “unstoppable.”

Different research indicates that the Artic may experience ice-free summers by 2050. In other words, if all the Earth’s ice melts, the ocean would rise about 216 feet. This significant rise in water levels would have a major impact on all countries bordering an ocean, and they’d lose a huge amount of land if this scary scenario unfolds.

The video focuses on what the U.S. will look like when Earth’s entire polar ice cap melts, revealing that the entire eastern seaboard, including the entire state of Florida, would be lost to the Atlantic Ocean. The same goes for major cities like Houston and New Orleans, as the Gulf of Mexico would further expand inland. Other researchers have said that up to 5,200 square miles of the Mississippi delta would disappear over the course of 85 years.

The Pacific Ocean will eat away at western cities close to the coast, destroying cities like San Diego. It could also turn San Francisco, Portland and Seattle into shadows of the cities they are now.

The full video explaining what would happen in this extreme situation follows below.