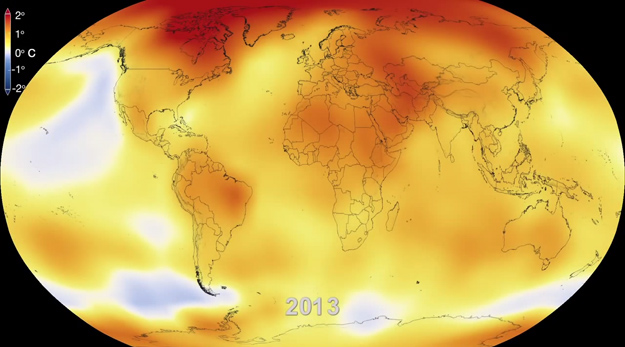 Global warming is still the topic of much debate, but a short video posted recently by NASA is fairly convincing. The 15-second animation, which was posted by NASA last week and picked up on Tuesday by Co.Exist, shows a view of the entire globe with an overlay that details climate change. NASA scientists analyzed data collected over the past 63 years by 1,000 meteorological stations from around the world, and the animation they compiled shows just how rapidly the Earth’s climate is changing.

The GIF above is a consolidated version of NASA’s full animation that helps illustrate just how drastic the change has been since 1950. Temperatures in some regions have swung by as much as 4 degrees Celsius in the past 60 years alone.

“Long-term trends in surface temperatures are unusual and 2013 adds to the evidence for ongoing climate change,” GISS climatologist Gavin Schmidt said with regard to NASA’s findings. “While one year or one season can be affected by random weather events, this analysis shows the necessity for continued, long-term monitoring.”

“Last year, when the concentration of carbon dioxide in the atmosphere surpassed levels of 400 parts per million, the amount of atmospheric carbon dioxide reached a higher point than it had at any time in the last 800,000 years,” Co.Exist’s Sydney Brownstone noted.