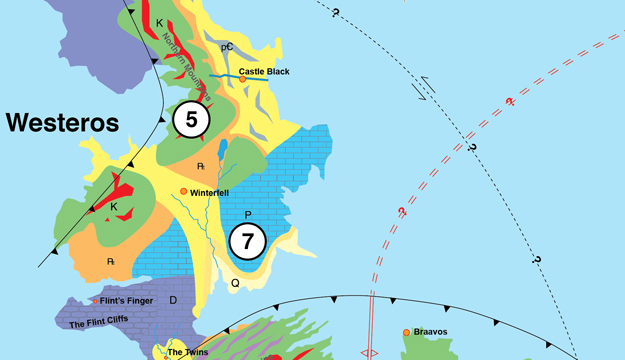 The fourth season of HBO’s hit series Game of Thrones kicked off this past week. 6.6 million people tuned into the premiere, making it the most watched single episode of an HBO show since the series finale of Sopranos. Based on author George R. R. Martin’s fantasy novel series titled A Song of Ice and Fire, the show takes place in a mythical world consisting of four continents, one of which is Westeros. We’ve all seen the models of Westeros in the show’s opening credit sequence, but a group of Stanford researchers have taken things to the next level by creating a series of geological maps that shows us how the landscape of Westeros might have evolved over time.

“We pieced this geologic history together from character observations, town names, official Game of Thrones maps, and the principles of geology learned here on Earth,” the group wrote on its blog. “Using only limited data we were able to reimagine 500 million years of planetary evolution, including volcanoes, continents rising from the oceans, and ice ages (with guest appearance by white walkers and dragons).”

The map below is a composite that shows many different stages of Westeros’ geological development, but individual maps covering 500 million years can be found on the Stanfard website, which is linked below in our source section.