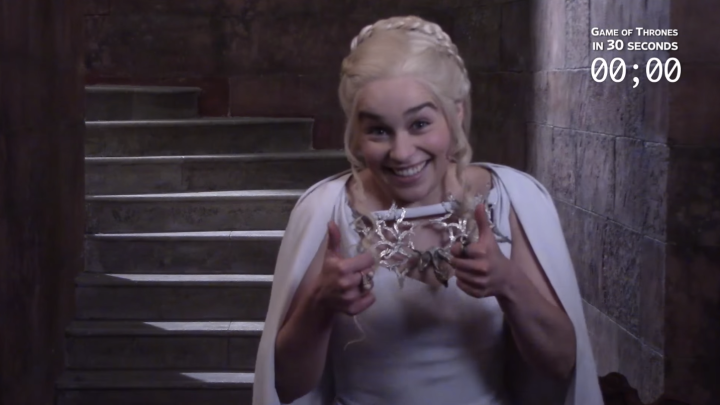 If you start today, you’ll probably have enough time to catch up on the first four seasons of Game of Thrones before the fifth premieres next month on HBO. It’s going to take some time, and you might not leave your house on the weekends, but it’s definitely possible to watch all 40 episodes in a month.

On the other hand, if you only have 30 seconds to spare between now and April 12th, this video will have to do.

This week, Entertainment Weekly gathered a few members of the cast to retell the entire story of the past four seasons in just 30 seconds, and unsurprisingly, they don’t get very far.

Arya is obsessed with death, Daenerys has delusions of grandeur, Tyrion confuses Game of Thrones with Breaking Bad, but to Jon Snow’s credit, he actually covers a few of the key plot points.

Alright, so it probably won’t help you get caught up with the show, but it’s funny nonetheless. Watch the full video below: