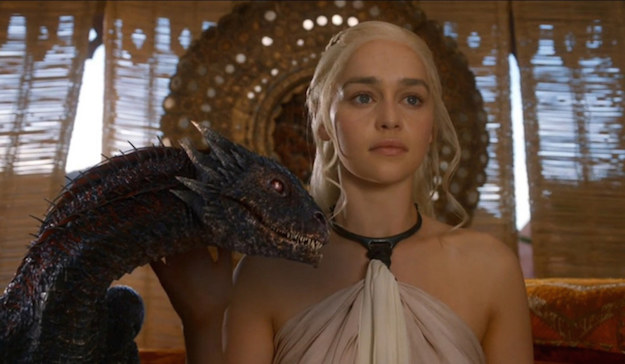 With season 5 of Game of Thrones now in the books, and Jon Snow officially dead (he is dead, right?), many fans are already starting to speculate on what we might expect to see in future seasons  Though seven seasons of GOT on HBO are reportedly planned, Game of Thrones scribe Geroge RR Martin still has to finish writing the last two books in the series. And while we have a long ways to go until we reach the series finale, Martin recently explained what users can look forward to when Game of Thrones reaches what will undoubtedly be a rousing conclusion.

In a recent interview with the New York Observer, Martin said that he already has a strong idea about how he wants the ending to play out, in a general sense.

I haven’t written the ending yet, so I don’t know, but no. That’s certainly not my intent. I’ve said before that the tone of the ending that I’m going for is bittersweet. I mean, it’s no secret that Tolkien has been a huge influence on me, and I love the way he ended Lord of the Rings. It ends with victory, but it’s a bittersweet victory. Frodo is never whole again, and he goes away to the Undying Lands, and the other people live their lives. And the scouring of the Shire—brilliant piece of work, which I didn’t understand when I was 13 years old: “Why is this here? The story’s over?” But every time I read it I understand the brilliance of that segment more and more. All I can say is that’s the kind of tone I will be aiming for. Whether I achieve it or not, that will be up to people like you and my readers to judge.

If it’s bittersweet, well, it’s a safe bet there’s going to be some bloodshed. Indeed, one of the great things about Game of Thrones is that Martin has absolutely no qualms about killing off major, and even beloved, characters. As Martin tells it, he hates when stories are predictable, which is to say he hates when audiences can reasonably assume that a beloved hero will live and a hated antagonist will die.