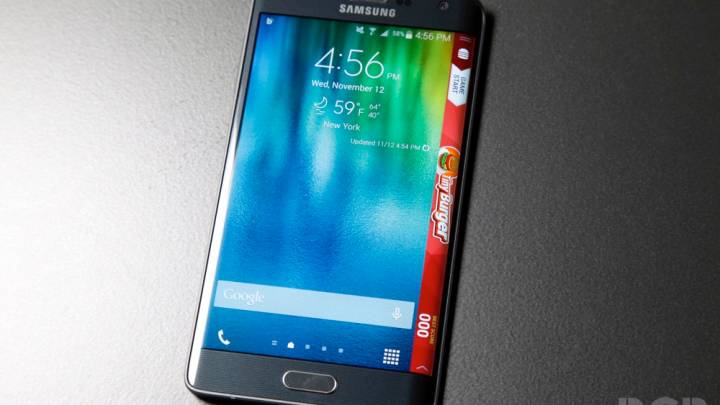 Samsung has already released a smartphone with a strange display — the Galaxy Note Edge that has an “Edge” screen on the right side — and it’s rumored to place two such touchscreen displays on either side of a special version of the Galaxy S6’s main screen. But the company isn’t the only handset maker looking to sell buyers on the idea of buying such smartphones with three-sided displays.

South Korean publication iNews24 points out that LG is also studying such technology for the future, having privately showcased a Galaxy Note Edge-like handset at CES 2015 this week. Even more interestingly, the device in question (pictured below) has two Edge displays, just like the rumored special edition Galaxy S6 model.

Samsung is also reportedly demoing the Galaxy S6 behind closed doors at CES, with some reports saying earlier this week that the company hopes to sell as many as 10 million Galaxy S6 “Edge” units this year.

As seen in the following image, LG calls this type of flexible display “Active Bending,” but it’s not clear when such a product would be launched, and whether LG will actually build such a handset. The picture also reveals the phone has a 6-inch HD AMOLED display.

Apparently, Xiaomi might be one of LG Display’s first customers that could put this technology to use in future smartphones.

LG has already launched at CES a phone with a curved display, the G Flex 2.