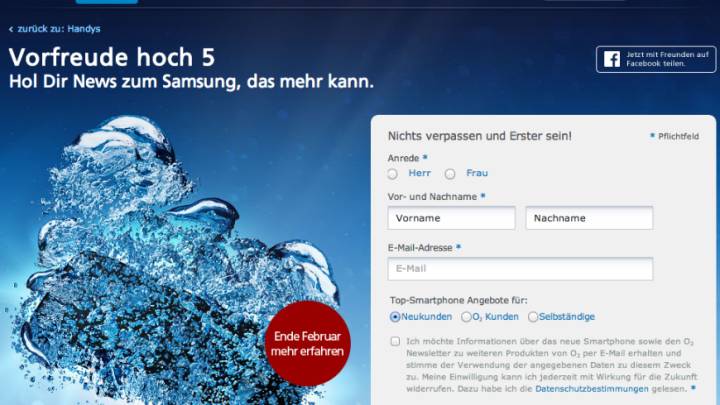 While the Galaxy S5 is yet to be officially announced by Samsung, one German carrier has already set up a teaser page for the handset, GottaBeMobile reports. O2 Germany has listed a special Galaxy S5 page that allows users to sign up for more information about Samsung’s upcoming flagship handset. The anticipation is high, O2 says on the page, encouraging users to sign up to receive news about the Samsung device that can do more stuff.

However, O2 is not revealing any details about the Galaxy S5, a phone that’s going to be unveiled at MWC 2014 on February 24, during a special Samsung Unpacked event. The carrier is not saying when it will have the handset in store, or how much it will cost. Instead, the mobile operator says that more information would be available at the end of February.

Interestingly though, O2 seems to indicate that the Galaxy S5 will have waterproof capabilities. Instead of posting a press image for the device, O2 shows on its registration page a handset under water. At the same time, the phone is surrounded by air bubbles, which may just be a play on O2’s name as well as a way to conceal the design of the Galaxy S5.

Existing rumors suggest that the Galaxy S5 will arrive in multiple versions, with some reports saying that a waterproof Galaxy S5 Active may also be in the works.