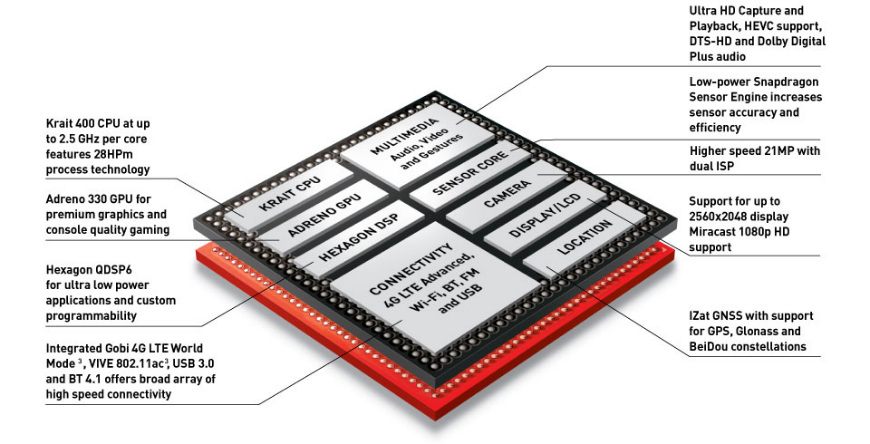 Both Samsung and Qualcomm unveiled new mobile processors that are believed to equip Galaxy S5 variants, including the new Exynos 5422 and the Snapdragon 801, respectively. When Samsung unveiled the Galaxy S5 on Monday, it only revealed that the device sports a 2.5GHz quad-core processor without specifying more details about it. However, when it published a specs infographic for the Galaxy S family, it noted that the Galaxy S5 will be available in two flavors when it comes to CPUs, including a 2.5GHz quad-core model and a 2.1GHz octa-core version.

The new Snapdragon 801 processor was announced on Sunday and has four Krait 400 cores with speeds up to 2.5GHz per core for “best-in-class” processing performance, Adreno 330 GPU graphics and “industry-leading battery performance.” Other features include support for up to 2560 x 2048 displays, on-chip LTE baseband, Quick Charge 2.0 technology, native support for 802.11ac Wi-Fi and digital imaging processing that should help with Samsung’s fast photo-taking claims for the Galaxy S5. However, this is not a 64-bit CPU.

Similarly, the new Exynos 5422 part of Exynos 5 Octa family of Samsung mobile CPUs is not a 64-bit processor. The chip was announced on Wednesday, and while Samsung has not mentioned anywhere that the Exynos 5422 will be part of certain Galaxy S5 versions, the new chip certainly seems to match the company’s recent infographic.

The Exynos 5422 will offer support for high-resolution displays including WQHD (2560 x 1440) and WQXGA (2560 x 1600), 4K UHD video playback, and battery efficiency thanks to a “proprietary mobile image compression (MIC) and adaptive hibernation technology.” Built on 28nm fabrication process, the Exynos 5422 will be up to 10% more efficient and deliver up to 34% higher performance than previous Exynos 5 Octa processors.

The Exynos 5422 is available now for sampling and is scheduled for mass production in the first quarter of 2014, another hint that the Galaxy S5 versions may have this particular chip on board. Samsung, however, is yet to confirm these processor choices for the Galaxy S5. Interestingly, both the Qualcomm Snapdragon 801 and the Samsung Exynos 5422 seem ready to support a “Prime” version of the Galaxy S5, a phone that was rumored to pack 2K resolution and 3GB of RAM prior to the event.