Samsung will reportedly launch new Galaxy S5 version in the coming weeks, with Galaxy S5 Prime and Galaxy S5 Active being the two new rumored devices. Additionally, a Galaxy S5 Google Play Edition may also be in the works. Of those, the Galaxy S5 Prime is the more interesting device, a handset that’s rumored to pack a 2K display and metal body. Over the weekend, two publications have posted images and videos showing the Galaxy S5 Prime – Galaxy S5 Prime images have not been leaked before – but they’re contradicting each other.

A PhoneArena reader sent in images of the Galaxy S5 Prime which apparently has a 2560 x 1440 (2K) display, aluminum body, and a speaker placed on the bottom. However, no actual evidence to support the display resolution claims has been provided. What’s obvious is that the handset in the images provided to the publication is not the regular plastic Galaxy S5 model.

A purported Galaxy S5 Prime or Active preproduction model has been obtained by TK Tech News, showing a thicker Galaxy S5 version that has a thicker waterproof seal which makes the phone considerably bulkier. Furthermore, the phone packs a metal case that lacks the dimple pattern found on the plastic model.

Later, the publication released several videos, showing the metal chassis of the phone, but also specs for the handset. The specs seem to suggest the phone may not necessarily be the Galaxy S5 Prime model, even though the Samsung describes it as the “Galaxy S5P” in the About phone section, and the phone’s model number appears to be SM-906A, which is consistent with previous Galaxy S5 Prime leaks. The device has a Full HD display like the regular Galaxy S5 model, a Qualcomm Snapdragon 801 CPU and runs Android 4.4.3 KitKat.

While it’s not clear whether this is a final Galaxy S5 version or just a test unit, Samsung may have threatened TK Tech News with some sort of legal action for showing the device on video.

The leaked Galaxy S5 Prime images from PhoneArena, and the videos from TK Tech News follow below. 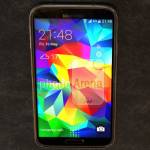