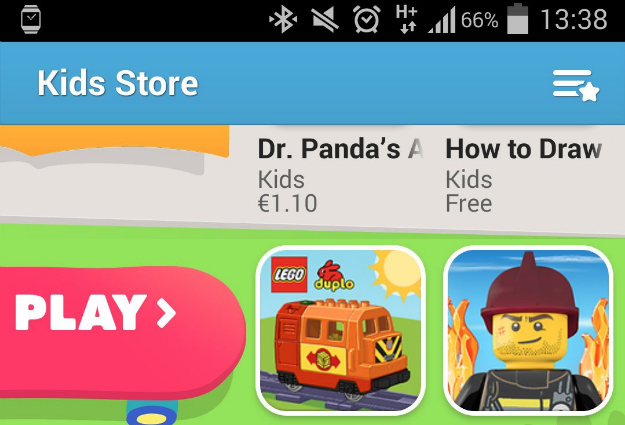 One of the Galaxy S5 features that was leaked before its official announcement and briefly described during the show at Mobile World Congress is the special Kids Mode functionality that allows parents to share their smartphone with their children, but only include certain features including access to games but also Samsung’s pre-loaded apps such as a basic drawing app, a voice recording app, special camera and gallery apps, and a karaoke app. But there’s also a Kids Store that provides access to even more apps.

Parents will be able to add other apps already pre-loaded on the phone to Kids Mode, as long as they feel their children should have access to specific titles. If that’s not enough though, kids will also have access to a special store, as SamMobile has now posted pictures of the interface for the Kids Store that will include only certain apps hand-picked by Samsung.

Pocket-lint, which took a closer look at Kids Mode, says the special mode is aimed at kids under 10, and the “approach is fun and very cartoony,” offering children a much more colorful experience. Apparently the same goes for the Kids Store, which has plenty of colors, and appears to include various app categories including Special, Learning, Play, Story and others. Interestingly, not all apps appear to be free of charge, so that children can safely install them without parents worrying about additional costs, as paid apps are also available – to access them, kids will likely need help from the actual owner of the Galaxy S5.