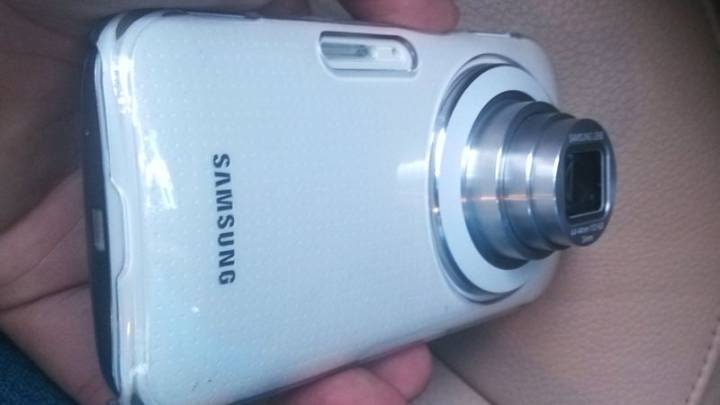 Next Tuesday, Samsung will unveil the latest addition to its camera phone lineup, the Galaxy K, complete with new branding and a fresh look. We have seen a single image of the device in a previous leak, but it was difficult to determine the proportions of the device. Thankfully, new photos have appeared on Baidu showcasing the slim design of the Galaxy K, along with its 10x optical zoom lens fully extended.

The Galaxy K is expected to feature a 4.8-inch Super AMOLED 720p display, hexa-core Samsung Exynos 5 processor, 2GB of RAM, 20.2-megapixel rear camera, 2-megapixel front camera and Android KitKat 4.4.2. A mid-range device through and through, the Galaxy K is still a marked upgrade over its predecessor.

Looking back, the Galaxy S4 Zoom was a rather bulky smartphone of limited usefulness, but the Galaxy K (or S5 Zoom) appears to have been significantly slimmed down. Without the defining protrusion of the S4 Zoom, the Galaxy K could be a more reasonably portable device. We had a hard time recommending the S4 Zoom, but if the Galaxy K’s improvements are as notable as the seem to be on paper, Samsung might have finally produced a camera-focused device worth checking out.

Samsung will take the stage on April 29th at the “Kapture the Moment” event in Singapore to officially announce the Galaxy K. Check out the leaked photos below.