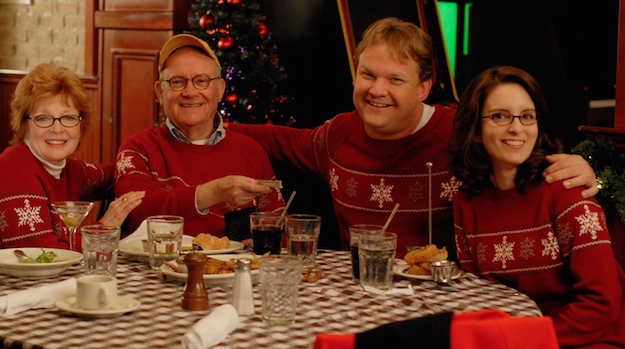 With Christmas just a day away, millions of Americans have been spending the week traveling back home in order to enjoy the holiday season and, of course, spend some quality time with family and friends. While a few days on the home-front can undoubtedly be relaxing, it can also border on chaotic and have you yearning for a little bit of a break.

DON’T MISS: ‘Star Wars Episode VIII’: Who’s coming back in the next movie?

If you find yourself in desperate need for a few laughs over the next few days, you might want to kick back and relax with some of the best comedic and holiday-themed TV show episodes currently available on Netflix.

Recently, Splitsider compiled an excellent list of TV episodes that, while certainly worth watching at any time, may resonate a little bit more deeply over the holidays.

Some of the more noteworthy listings include:

Back in season 3, The Office was still killin’ it every single week. If you haven’t seen this old episode yet, you’re missing out. One of my favorite scenes from this episode is when we learn that Michael Scott, in an effort to impress his current girlfriend, photoshopped his face in place of her ex-husband on an old family photo of hers.

If you haven’t had the pleasure of watching Arrested Development, you might want to binge watch the entire series over the holiday. It’s that good. The jokes come extremely fast and are memorably and hilariously witty. As for Afternoon Delight, it houses one of the more referenced lines of the show: “Yeah, the guy wearing the $4,000 suit is holding the elevator for the guy who doesn’t make that in four months. COME ON!”

BoJack Horseman is a hilarious animated Netflix original featuring a kooky world where animals and humans coexist as equals. It admittedly sounds crazy, but the show works thanks to a memorable cast of characters and top-notch writing. The show focuses on a former TV star named BoJack who used to star in a cheezy 80’s sitcom called Horsin’ Around. While the show will occasionally use quick flashbacks to incorporate clips from the show, the show’s creators last year gave us a look at what an actual Horsin’ Around Christmas Special from the 80s would have looked like.

A few of the other awesome holiday themed TV episodes that made Splitsider’s list include selections from It’s Always Sunny in Philadelphia, Cheers, Friends, Futurama and a whole lot more. Make sure to hit the source link below for the full run-down.

Now for as great as the aforementioned list is, it did manage to leave out a few gems. That being the case, here are two more hilariously holiday-themed TV episodes you can find on Netflix.

For a number of years, 30 Rock was in the zone, churning out great episode after great episode. In this 2007 episode, we finally are given a hilarious peek at Liz Lemon’s ridiculous family.

It’s hard to believe that this episode is now more than 14 years old. Nonetheless, the comedy still holds up.