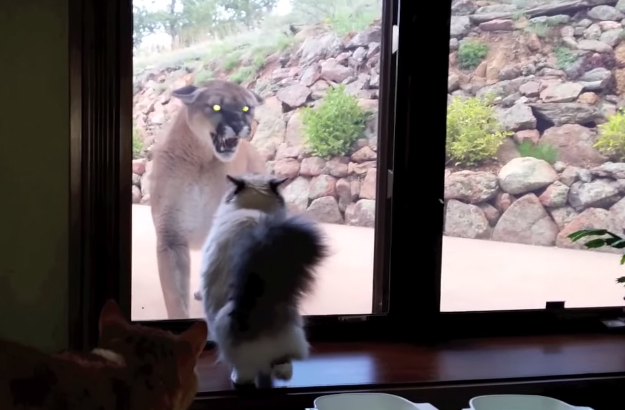 Cats might be a lot tougher than you think they are, as indicated by new series of funny cat videos that went viral on YouTube. First we had a cat that flew on the wing of an airplane, then we looked at a cat scaring a bear, and now it’s time to check out a tough kitty that stares down a mountain lion.

As was the case in yesterday’s bear video, this new homemade clip features a house cat that happens to be looking outside the window as a wild animal walks by. In this case, it’s a mountain lion.

Even though the kitty significantly smaller, it stayed calmed and kept staring back at the fierce wild cat. The only thing that seemed to divert the cat’s attention was comedian Tom Mabe’s cruel joke – he told his wife the kids were outside while the mountain lion was still there – that prompted an unsurprisingly frightened reaction from her.

The video, recorded a few days ago at a home in the Rocky Mountains some 10 miles west of Boulder, has already gone viral on YouTube. See it in full below.