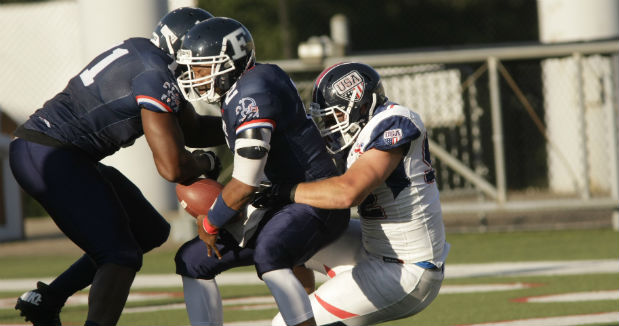 Sacré bleu! Did the French really think they could beat Americans in a game of American football? This week the U.S. faced off against France in the International Federation of American Football (IFAF) World Championship and gave the hapless Frenchmen an 82-0 beatdown that actually would have been even worse had the Americans not decided to be jerks and go for two extra points after scoring their first two touchdowns. The French were able to stop those conversion attempts, but that was pretty much the only thing they did right.

Looking at the box score gives us an even better idea of how much of a rout this was. France had a total of seven first downs the entire game compared to the Americans’ 24. The U.S. piled up 334 net rushing yards while France’s ground attack totaled… -26. Yes, that’s a minus sign in front of the 26.

Interestingly, the time of possession in the game was pretty evenly split, but that’s only because the U.S. scored so quickly that it never took very long for France to get the ball back. The Americans scored touchdowns on all of their possessions except for two and it often took them five plays or fewer to reach the end zone.

At any rate, this is something for we Yanks to hold onto the next time our men’s team gets positively humiliated in the World Cup…