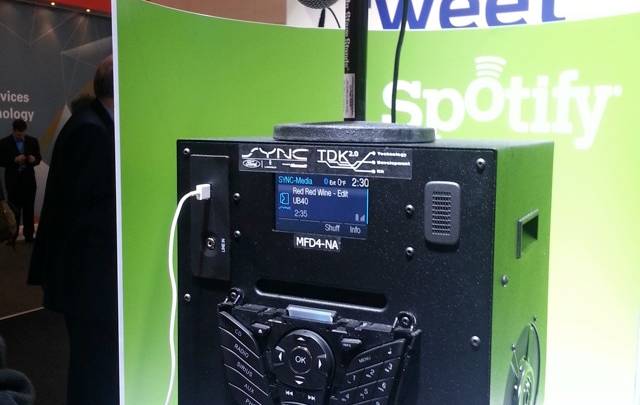 We had the opportunity to tour the Ford booth on Tuesday at Mobile World Congress, and were treated to a first-hand walk-through of the newest version of the company’s Sync in-car media and voice command technology. Chief among the new features is Spotify integration, giving subscribers ubiquitous access to the streaming music service by way of a few simple voice commands.

In practice, the service works without complicated commands, which is a good thing when it comes to controlling media while in motion. The fewer options, the fewer distractions, the safer the passengers. Accessing Spotify via Sync effectively renders your handset’s media interface useless by way of a slick splash screen is a vote in favor of safety, and we support Ford’s move to audio-only control while the car is in motion.

The arrival of Spotify in Ford vehicles across the world (Ford announced that it will be bringing Sync to the European market as well, beginning with the EcoSport SUV) also heralds the introduction of a set of public APIs available to app developers across the Android, iOS and BlackBerry platforms. Interested software makers can now incorporate Sync into their apps, providing opportunities for integration with popular Navigation and media offerings.

As integration like this becomes commonplace, traditional AM/FM radio will continue its long, slow, sad decline into obscurity. Beginning with Sirius/XM, the automobile, once a sanctum for radio broadcasting, has been slowly moving to mirror the home multimedia environment. Radio consumption has been on a steady decline over the last decade. The easier it is to access customized on-demand content in the car, the less people will reach for the tuning dial during their morning drive.

In 2012, two-thirds of traditional radio listening occurred away from home, with the majority of that taking place in an automobile. In 2011, 19% of people 18-24 used streaming audio services while driving, a figure Ford is clearly looking to capitalize on and expand. Great news for consumers looking for a more personalized experience in the car, but potentially disastrous news for the HOT 97s and Z-100s of the world.