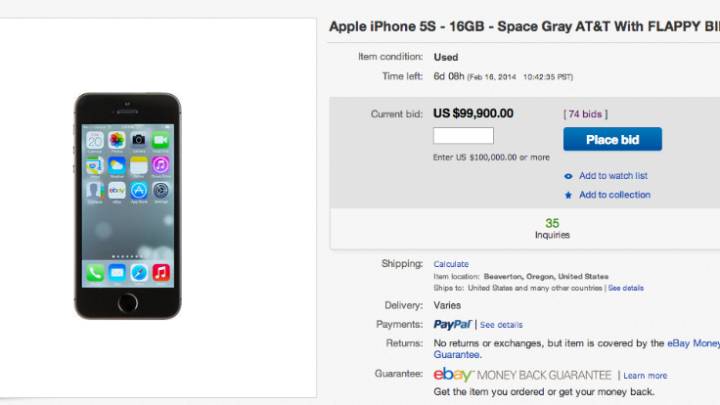 Flappy Bird developer Nguyen Ha Dong on Saturday surprisingly announced via Twitter that he will remove the popular game from app stores in following hours, and he kept his promise, as the game went down both in the App store and in the Google Play Store at midnight local time on Sunday. “22 hours rom now, I will take ‘Flappy Bird’ down” Dong said on Twitter. “It is not anything related to legal issues. I cannot take this anymore.” However, that doesn’t mean the game is completely unavailable.

Anybody who has downloaded the game before being removed from the stores can still play it on the devices it was installed on. In fact, some individuals decided to auction on eBay their mobile devices with Flappy Bird on board, iDownloadBlog reports.

A 16GB iPhone 5s’ price is currently at $99,900 after 74 bids, with the bidding war having started at $650, and there are more than six days left for the auction. Comparatively, an auction for an iPhone 5 with Flappy Bird pre-installed is currently at $80,700, significantly up from the initial $750 start price. Many other devices with the game pre-installed are also selling on eBay.

Flappy Bird was apparently earning Dong $50,000 a day from advertising, being one of the most popular games in both Apple’s and Google’s app stores. The Vietnamese developer was expected to create a Flappy Bird version for Windows Phone as well, before deciding to remove the game, Reuters reports. However, the developer doesn’t intend to sell the game, or at least that’s what he said on Twitter.

Apparently Dong has received a warning letter from Nintendo – Flappy Bird is inspired from the Mario Bros universe,” – although the company did not intend to sue him, the publication has learned.