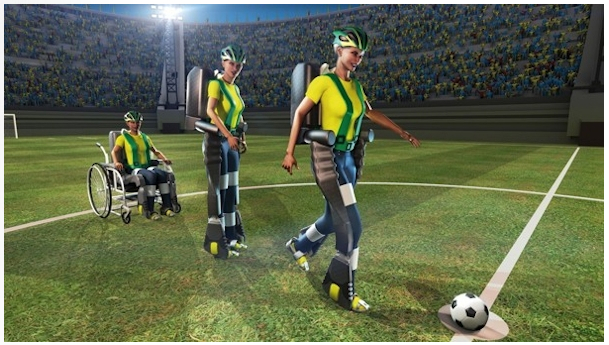 The first ceremonial kick at the opening 2014 World Cup game taking place in Brazil later this year may be delivered by a paralyzed teen who will control an exoskeleton body to allow him to move and actually hit the ball, NewScientist reports. The teen is now training in virtual reality with the technology that will let him kick the first ball at the competition. The teen will wear an exoskeleton that will support his lower body and will respond to wireless commands received from electrodes placed on the scalp or within the brain and converted into movement by a computer that’s also worn by the kicker.

The research behind this Walk Again Project is backed by a variety of institutions from the U.S., Germany, Switzerland and Brazil. The researchers aim to make movement feel more natural to paralyzed people by including sensors into the exoskeleton that will be able to provide feedback to the wearer including touch, temperature and force. In the future, the feedback may be transformed in sensations and fed back to the brain.

“The vibrations can replicate the sensation of touching the ground, rolling off the toe and kicking off again,” explains Gordon Cheng, a lead robotics engineer at Technical University of Munich, Germany. “There’s so much detail in this, it’s phenomenal.”