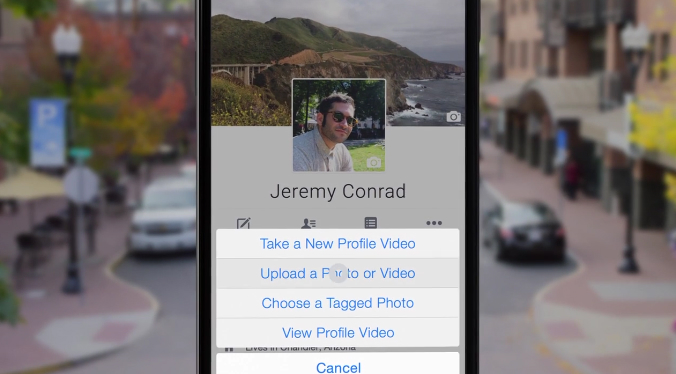 Facebook announced on Wednesday that it’s making some significant changes to its mobile apps, most of them concerning your personal profile. For the first time, the company will let people use videos instead of profile pictures on iPhone and Android, to give them an even better way to show off their online identities. The new features are currently being tested by a number of users in the U.K. and California, and will be rolled out to all Facebook mobile users in the near future.

Facebook will soon let you shoot a short video clip and set it up as your looping profile image – just like a GIF. You’ll just have to tap on your existing profile picture (or video) and choose an appropriate option (see image above). In addition to recording a video, you’ll also be able to upload an animation of your own if you already have one.

It’s not clear at this time whether the iPhone 6s’ Live Photos feature will be supported.

Facebook will also let you set up temporary profiles alongside a particular event. The fleeting images will last only for a preset amount of time, and they will then revert to the default option once the time expires. The company decided that your profile image/video needs to take a front-and-center position on your profile as well, meaning they’ll be now be seen at the center of the page and will occupy more space on the screen.

Additionally, Facebook is adding a new bio feed on top of the profile that users can customize to describe themselves better. Facebook will also let you pick you favorite pictures to appear on your profile in the future.

A video explaining some of the changes coming to Facebook profiles follows below.