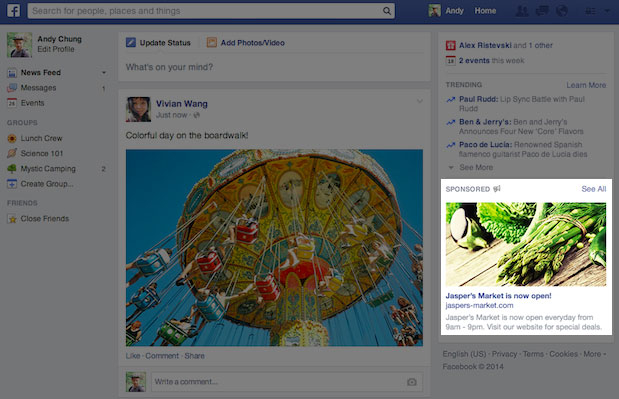 Facebook on Wednesday announced new changes to the way it displays ads – its bread and butter – on the desktop, revealing it wants to show its users fewer ads in the right-hand column as before, but make them bigger than their predecessors. The bigger ads will start rolling out later this month, but Facebook will keep supporting both small and big ads in the right-hand column during the transition.This is one of Facebook’s latest changes when it comes the way it displays its ads, after recently deciding to feature autoplay ads in the News Feed.

“This updated look will make right-hand column ads more visually consistent with the ads that appear in News Feed,” the company wrote “They will use the same proportions as desktop News Feed ads, they will be larger in size, and there will be fewer of them. For advertisers, this offers a simpler way to create ads and an enhanced creative canvas on the right-hand column of Facebook.”

According to its internal tests, the bigger ads not only offer a better experience to users, but they have also tested better in engagement tests. The company revealed it saw up to three times more engagement from Facebook users on desktop with the bigger ads, which may be good news to both advertisers and Facebook.