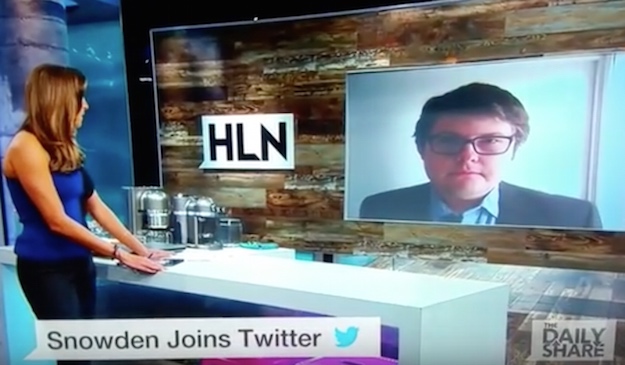 HLN, a headline news cable channel owned by CNN, was hit with an epic and hilarious troll job yesterday when media personality Jon Hendren was brought on to discuss the implications and significance of Edward Snowden joining Twitter. During the course of what was ostensibly a serious interview with HLN anchor Yasmin Vossoughian, Hendren hilariously began answering questions about Snowden by instead referencing Edward Scissorhands.

For instance, when asked about Snowden’s NSA data dump and its potential to put U.S. lives in danger, Hendren’s answer swiftly and spectacularly drifted into the absurd.

“Well, you know, to say he couldn’t harm somebody with what he did, he could have, absolutely he could have,” Hendren answered while seemingly remaining on-topic. “But I think to cast him out, to make him invalid in society, simply because he has scissors for hands… I mean that’s strange because, I mean, people didn’t get scared until he started sculpting shrubs into dinosaur shapes and what not.”

All the more peculiar is that Vossoughian was seemingly oblivious to Hendren’s shenanigans. Either that, or she shrewdly decided that the best way to deal with such was to simply act as if everything was completely normal.

Following up, Hendren was asked about Snowden being granted asylum in Russia.

Without missing a beat, and while maintaining an appropriate demeanor, Hendren answered calmly: “Look, yeah, casting him out is just completely wrong. We’re treating him like an animal, like someone who should be quarantined and put away. Just because he was created on top of a mountain by Vincent Price, and incomplete with scissors for hands and no heart, Edward Scissorhands is a complete hero to me.”

Still acting as if nothing was amiss, Vossoughian asked Hendren yet again about Snowden’s choice to “live in a country like Russia.”

Bringing it home, Hendren responded: “I mean where else is he going to go. We cast him out. We got scared when he poked a hole in the waterbed with his scissor finger, that was just unreasonable.”

Pure brilliance, and yes, that was highly unreasonable.

All in all, this is an all-time great troll job.