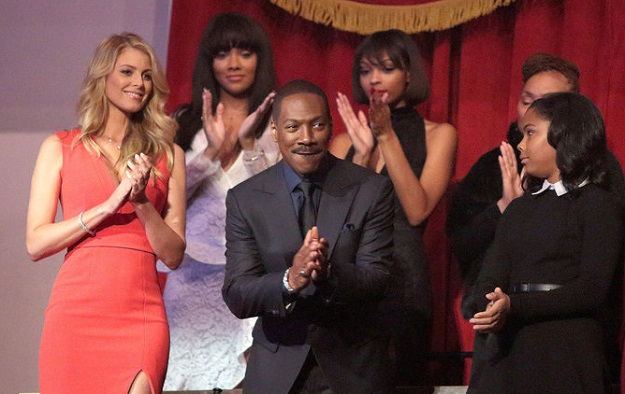 Over the weekend, Eddie Murphy was awarded the Mark Twain Prize for American Humor at the Kennedy Center for the Performing Arts in Washington, D.C. After accepting the award on stage, Murphy, seemingly out of nowhere, busted out his Bill Cosby impression. It was an interesting turn of events given that Murphy, just a few months back, flat-out refused to perform his Cosby impression during Saturday Night Live’s 40th anniversary special.

But on Sunday night, Murphy came out guns a’blazing.

“Bill has one of these,” Murphy said, in reference to the Twain Prize for humor he just received. “Did ya’ll make him give it back? No, because I know there was a big outcry from people that was trying to get Bill to give his trophies back.”

“You know you’ve fucked up when they want you to give your trophy back,” Murphy concluded.

Not finished there, Murphy added: “He should do one show where he just comes out and talks crazy now.” From there, Murphy quickly transitioned into a full-fledged Cosby impression.

“I would like to talk to some of the people who feel that I should give back my motherfucking trophies,” Murphy said while impersonating Cosby.

“You may have heard recently that I allegedly put the pill in the people’s stomach […] If I ever see or meet this Hannibal Buress in person I am going to try and kill this man!” Murphy added, still in character.

Buress, in case you’re unfamiliar, is a comedian who first brought the Cosby rape allegations back into the public spotlight after referencing the story during a stand-up act about one year ago. Since then, scores of women have come out with similar stories of Cosby drugging them and subsequently sexually abusing them.

As for why Murphy was willing to roll out his Cosby impression this weekend but not on SNL earlier this year, the legendary comic and movie star explained to the Washington Post recently:

“I totally understood,” Murphy says, speaking about the anniversary show for the first time.

“It was the biggest thing in the news at the time. I can see why they thought it would be funny, and the sketch that Norm [Macdonald] wrote was hysterical.”

“It’s horrible,” he says. “There’s nothing funny about it. If you get up there and you crack jokes about him, you’re just hurting people. You’re hurting him. You’re hurting his accusers. I was like, ‘Hey, I’m coming back to SNL for the anniversary, I’m not turning my moment on the show into this other thing.’ ”

Interestingly enough, Murphy wasn’t the only big star to take unexpected shots at Cosby recently. About a week ago, Malcolm-Jamal Warner, who played Cosby’s son Theo Huxtable on The Cosby Show, said that the acclaimed TV show has now been “tarnished” by all of the rape accusations against Cosby.

“And the fact that we no longer have that, that’s the thing that saddens me the most because in a few generations the Huxtables will have been just a fairy tale.”