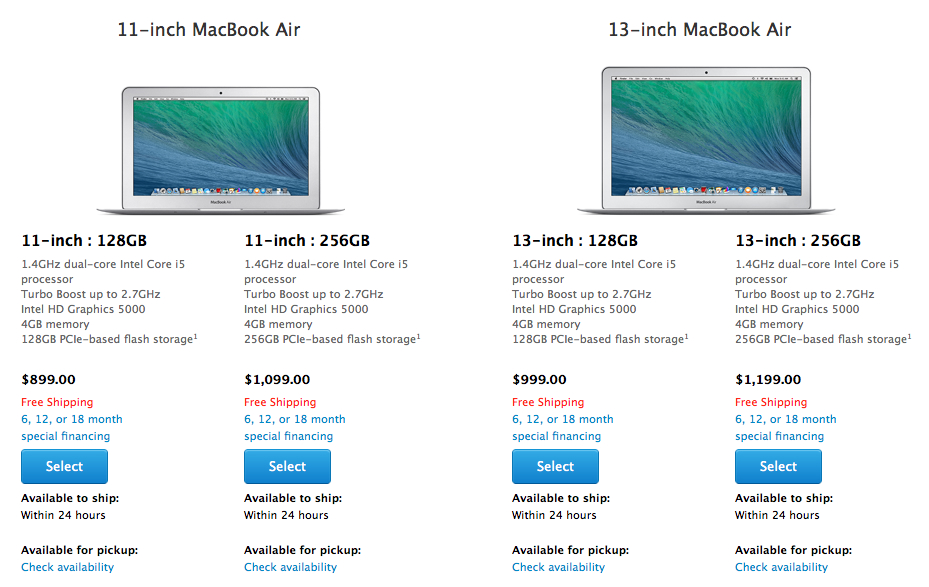 Apple on Tuesday quietly unveiled new MacBook Air models, as previously reported, but the new laptops will not offer any particularly interesting updates – a recent report claimed new Air models will be even thinner and lighter than their predecessors, but that’s not the case for Apple’s early 2014 Air models. What’s significant though is that the new Airs are now cheaper than ever, no matter what model buyers end up choosing.

For the 11.6-inch MacBook Air model pricing starts at $899, or $100 less than before, while the cheapest 13-inch MacBook Air now costs $999, also $100 less than its predecessor. That effectively means customers can order their Airs with a “free” memory upgrade (8GB instead of 4GB), and pay what they would have paid yesterday for the 2013 models.

When it comes to specs, the early 2014 MacBook Air models only offer a slight performance bump, featuring faster Intel Haswell processors for all models. Base configurations will pack a 1.4GHz dual-core Intel Core i5 processor, Intel HD Graphics 5000, 4GB of memory and 128GB SSDs, although buyers are able to also choose more RAM, higher capacity SSDs or go for build-to-order configurations.

The new Airs are already available to order, and will ship within 24 hours.