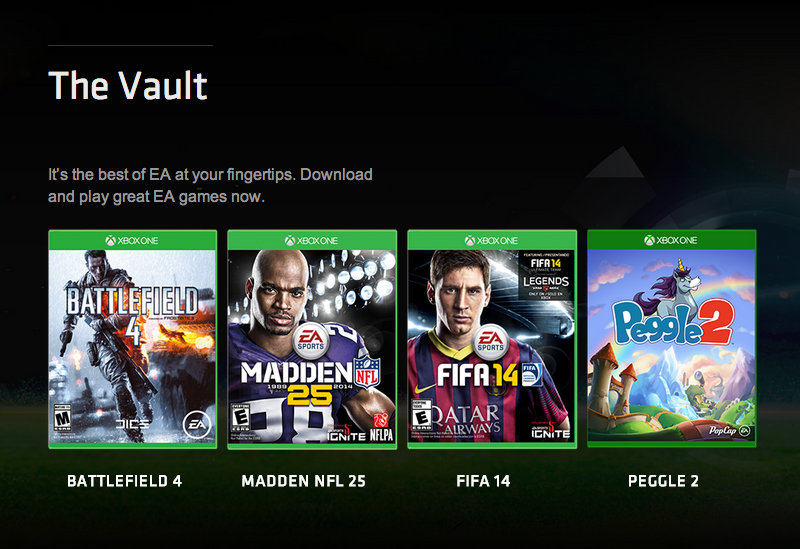 EA shocked everyone last week with the introduction of EA Access, a subscription service for Xbox One that offers discounts on EA games, early access to unreleased titles and a selection of free games for members. It all seemed to good to be true, especially coming from the company that unleashed the nightmarish Dungeon Keeper and the similarly awful Sim City relaunch onto the world, but as EA shares more details about the new service, it just keeps sounding better.

Speaking with CVG, EA COO Peter Moore confirmed that every game in the “Vault” (the library of free games in EA Access) will be there to stay.

“New game additions will be determined by franchise and timing,” Moore said to CVG. “We have to make decisions along that way, so there’s no template, like 30 days after a game ships it goes into the Vault. I think one of the key things is that once a game goes into the Vault it stays there, it’s not going to be taken out, that’s a commitment we’ve made.”

The games currently available in the Vault are Battlefield 4, Madden NFL 25, FIFA 14 and Peggle 2. Moore says that this is just the beginning of what will grow to be a strong offering of titles gamers will want to play.

“The Vault will get its share of triple-A titles,” Moore told CVG. “We haven’t made any announcements to that extent about exactly when, where and how, but the Vault will be substantial.”

As for Sony’s decision to skip out on EA Access:

“It’s tough for me to comment on Sony’s comments,” said Moore. “I think they made themselves pretty clear.”