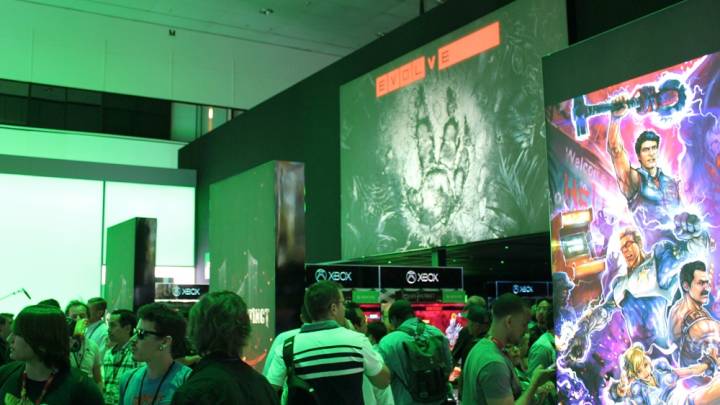 My goal this year at E3 was to get hands-on time with as many games as I possibly could. Between booth tours, meetings and running around the show floor, I’m well on my way to exceeding my own expectations, so I figured I would keep a log of every game I played each day at E3.

I started the first day with meetings at Microsoft, so I wandered around the Microsoft booth to find some of the games that had grabbed my attention during the press conference. The Crew caught my eye immediately. I had heard mixed things from friends at the show who had seen the game at previous events, but I had to see how a coast to coast road trip translated to a console racing game.

I came away with similarly mixed feelings — the game looks great, and the map is as ridiculously impressive as it sounds, but the driving just doesn’t feel very good. It’s far too touchy. Where I’d be smoothly drifting around a corner in Need for Speed or Burnout, I was flailing through the streets, spinning out at every other corner in The Crew.

Sticking with the genre, I moved on to Forza Horizon 2 next, yet another open world racing game. This demo was much shorter, just a single race, but the controls felt infinitely tighter than The Crew. Forza Horizon 2 won’t be nearly as enormous as The Crew, but this team did a great job with the first game in the series, so it doesn’t come as much of a surprise.

After that it was time for my first meeting. If you’d like to read about it, check out my Fable Legends preview that went up on Tuesday.

Following the meeting, I couldn’t resist the call of Super Smash Bros. any longer. I waited for an opening and jumped in with three other combatants. I’ll have a little more time with the game, and likely a full preview, in the next day or so, but Super Smash Bros. for Wii U feels a lot like Super Smash Bros. I played through the first round with Mega Man, and was promptly slaughtered by the competition, so I moved on to Mario in round 2. I was slightly more successful, but still couldn’t pull out a victory.

My last diversion for the day was Far Cry 4. As with the Forza demo, the Far Cry 4 demo consisted of a single fortress raid. Although smashing through the gate with an elephant and tossing gun-toting baddies through the air with my pachyderm friend’s trunk was a sight to behold, running and gunning in an enclosed area isn’t really where Far Cry shines. Kyrat looks amazing though and I can’t wait to see more later this year.

I ended the first day with two more meetings behind closed doors with Microsoft. First up was Ori and the Blind Forest, which I’ll have a full preview for soon. Finally I met with two developers who were working with the ID@Xbox program, which brings independent developers to the platform. Storm in a Teacup is working on Nero, a first-person puzzle game with huge, explorable environments and a very personal story. The Farm 51 is in the early stages of building Get Even, a first-person shooter in which all the environments will be captured using 3D scanning technology.

Wednesday will be packed from start to finish with booth tours and meetings, including EA, Sony and Nintendo, so expect even more detailed previews later in the week. Until then, keep reading all of our E3 2014 coverage.