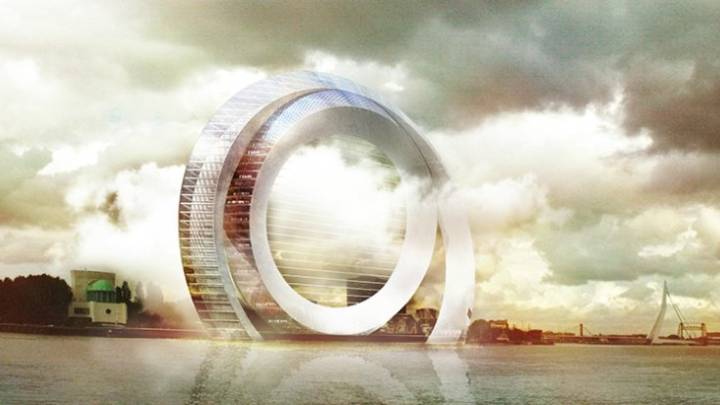 You probably have no idea what the picture above actually depicts. For your information, it’s a concept of a Windwheel building that will house 72 apartments and a hotel. But more interestingly, it’s a modern windwheel that’ll be able to generate enough power to sustain life inside it and power an additional of 1,000 homes.

The project is real, and Dutch architects want to erect this building in Rotterdam, Science Alert reports.

This particular creation is based on a project from researchers at the Deft University of Technology who have designed an alternative way of harnessing the power of the wind to generate electricity.

Their invention is meant to replace noisy wind turbines that can’t be placed within cities with a system that uses the wind to transport electrically charged particles — in this case, water — to generate power. Additionally, the building would also be able to turn solar power into electricity.

The Dutch Windwheel would measure 174 meters, making it a gigantic structure in Rotterdam that’s likely to attract many tourists. The building’s outer wheel would actually act as a Ferris wheel with 40 rotating glass cabins. The inner wheel will house office space, apartments, a seven-story hotel, and a restaurant that’ll likely offer spectacular views of the city.

The daring project might be ready for mass consumption by 2025, assuming the technological advances required to make it work — mainly the energy-collecting side of the project — will meet expectations. The Windwheel has to be able to generate 1MW of power.

More details about the wind-based technology developed by Deft University are available in the following clip while the Dutch Windwheel project is further described at this link.