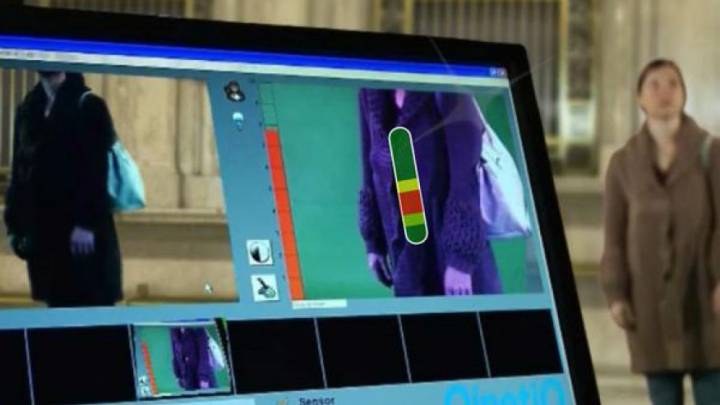 New tech could be coming to an airport near you to help keep you safe.

Unveiled for the first time at last week’s Defence and Security Equipment International (DSEI) exhibition in London, the TSA is developing the SPO-NX with QinetiQ, a U.K.-based defense specialist that has its roots in the British Government’s prestigious Defence Establishment Research Agency.

Terrorists often seek to strike in areas that are densely populated.  It is very challenging to protect these environments. But with this state of the art technology, threats lurking in a crowd can be spotted and exposed from a distance.

The SPO-NX could help protect a wide range of crowded areas like airports, subways, train stations and stadiums.

There’s no need to line up or endure crowded delays with this system. And it’s different to the portal you walk through at the airport. This system can scan people as far away as approximately 50 feet. It hunts for threats while people are going about their business and moving around.

SPO-NX seeks out and reveals dangerous concealed items ranging from explosives through to weapons.

It can see hidden threats, but it does so discreetly. The technology does not create an image of what your body looks like beneath your clothes. The operator only sees a CCTV picture of folks scanned with suspicious items flagged.

And it also does not emit any radiation so it is completely safe. The system reads energy that comes off the human body to reveal hidden potentially dangerous objects.

SPO-NX detects threats by passively sensing the energy that naturally occurs from both individuals and the things that they may be carrying. The technology then processes and evaluates this data to expose suspicious items.

If a possible threat is identified, the operator sees the assessment overlaid onto a CCTV image that can then be evaluated.

How is it better?

The SPO-NX is the next generation of  Qinetiq’s SPO-7R technology that is already used by the TSA. Both are threat detection systems. This technology leverages passive millimeter wave body scanners to identify dangerous objects.

Like the SPO-NX, the SPO-7 has two components: sensors and a monitoring site.

Related: Shopping for a commando boat?

The goal for this version was enhancing the detection capability of the technology while also improving its speed and flexibility.

The unit is more easily portable and faster to set up. And there’s a lot more flexibility for this version. This latest variant can operate remotely through Ethernet and be positioned in a wide range of places including walls and ceilings. The interface has also been improved to make operating the device more intuitive, easier to use and effective.

QinetiQ received a $2.86m contract from the U.S. government last year to develop this solution.