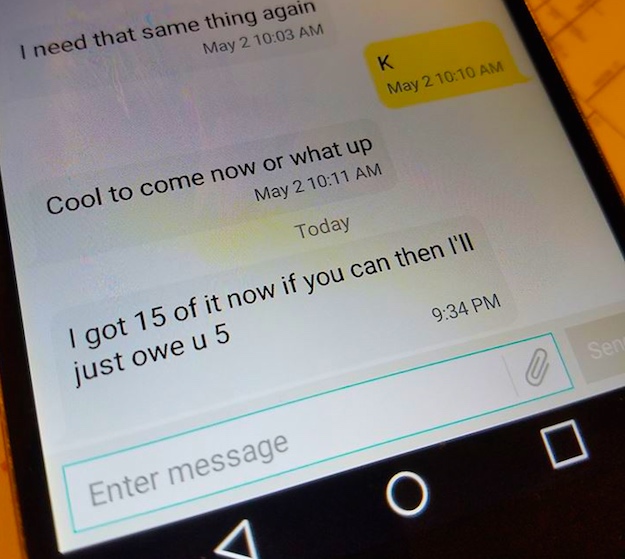 In a bit of offbeat news that seems like it could have fit right in as a humorous plot point on Breaking Bad, police in Alliance, Ohio recently confiscated a drug dealer’s phone and are now being bombarded by texts and phone calls from customers looking to pick up some product.

In fact, the sheer volume of communications being directed at the drug dealer’s phone has prompted authorities there to plead (somewhat jokingly) with customers to stop texting and calling.

“Police are trying to search through texts and contacts,” WCMH-TV News reports, “but they say that the constant stream of calls and texts is ‘really annoying.'”

As if that weren’t funny enough, Alliance Police even posted an amusing and playful Facebook post imploring individuals on the hunt for drugs to lay off for a bit.

PLEASE STOP CALLING Steve Notman’s cell phone. He was arrested tonight by SIU detectives….again…. for ALLEGEDLY (on video) selling crystal meth here in Alliance. We have his phone and are trying to read all your texts requesting drugs and going through all of his contacts (with his permission) but you keep calling and texting and it’s really annoying. First of all, he is all out of drugs for tonight. Secondly you don’t need to call – we will come to you soon enough. Oh, and his ringtone is terrible! Thank you so much for your patience.

Talk about an embarrassing way to get caught.