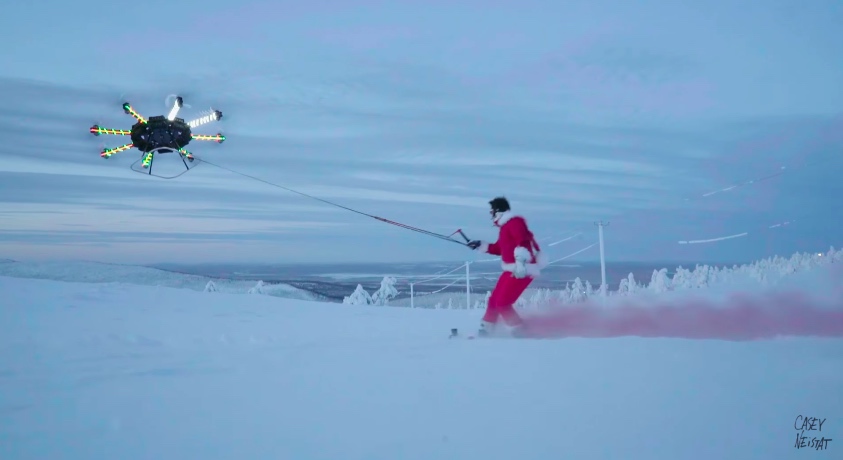 As drones have become more affordable and capable, people have come with all sorts of crazy drone-related contraptions. Whether it’s someone attaching a machine gun to a drone or someone roasting a turkey with a flamethrower affixed to a drone, it seems that we can’t even go a month without seeing someone try and put their own unique stamp on drone ownership.

A new video from Casey Nesistat, however, might take the cake. The video starts off with a bang as it features Nsistat donning a Santa suit and being hoisted over the roof of a house by a relatively large drone. The title screen then reads, “No one in the world sells a drone that can lift a human being, so we built our own.”

And build it they did. The video below — appropriately titled Human Flying Drone — features 4-minutes of absolutely jaw-dropping footage as we see this man-made drown impressively pull our Santa-suited hero on a snowboard in what, I think we can all agree, should instantly be a new extreme sport.

Coupled with a solid soundtrack — Ol’ Dirty Bastard’s classic Shimmy Shimmy Ya — this video is undoubtedly one of the the cooler things we’ve seen on the web in quite some time.

For anyone interested, there’s a behind the scenes video that takes a closer look at this crazy contraption.

Incidentally, Neistat recently inked a lucrative deal with CNN wherein the YouTube star will create a new video brand for the news network.