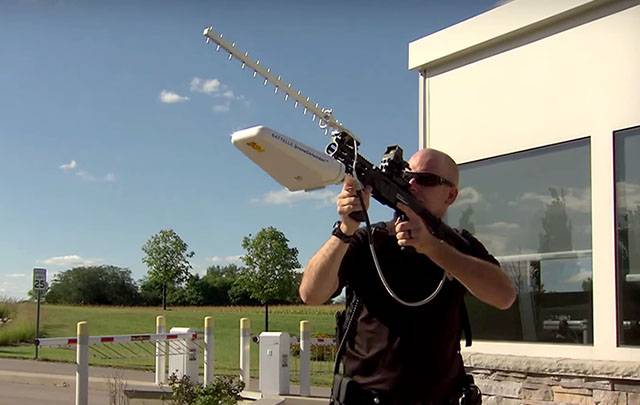 One would need to be quite the marksman to shoot a drone out of the sky with a conventional rifle. Firing a bullet with a diameter of only about 7mm and hitting an airborne drone from several hundred feet away is obviously no easy task. But a new rifle unveiled earlier this week is a game changer for individuals and organizations looking to protect their privacy and safety by warding off snooping drones, and it doesn’t even fire a single bullet.

MUST SEE: Adobe confirms major Flash vulnerability, and the only way to protect yourself is to uninstall Flash

Ohio-based nonprofit research and development firm Battelle this week unveiled a device it calls the DroneDefender, which it says is “the first portable, accurate, rapid-to-use counter-weapon to stop suspicious or hostile drones in flight, providing critical security protection at home and abroad.” While it’s not a weapon in the conventional sense, it represents a huge step in the fight against unwanted drone activity.

While the term “drone” has recently had its scope extended to include a wide range of simple radio controlled quadcopter aimed at recreational use, not all drones are fun little gadgets. Drones are used regularly as invasive tools intended to spy on individuals or even top-secret business operations. Beyond that, military, governments and law enforcement are targeted by spy drones on reconnaissance missions.

The DroneDefender may be our first look at the perfect anti-drone technology. The device, which looks like a modern rifle with an antenna mechanism attached to the front — because that’s basically what it is — uses targeted radio waves to force drones out of the sky. The nondestructive tech “utilizes a non-kinetic solution to defend airspace up to 400m against UAS, such as quadcopters and hexacopters, without compromising safety or risking collateral damage.”

Regulations in many regions obviously prevent people from firing conventional weapons at drones as a means of defense, so the DroneDefender rifle could be an ideal workaround. The device also has a range of more than 1,300 feet, and that may even improve in future versions.

“This is just the kind of tool we need to safely counter a drone threat,” said Battelle’s lead researcher Dan Stamm. “The DroneDefender can help protect us from those who may wish to do us harm.”

“It can help us in numerous settings, from the White House lawn to bases and embassies overseas; from prisons and schools to historic sites,” technical director Alex Morrow added. “It easily and reliably neutralizes the threat.”

The video embedded below shows a demo of the DroneDefender in action. While the demo is simulated due to federal regulations in the U.S., Battelle notes that it has been successfully tested in the field numerous times.