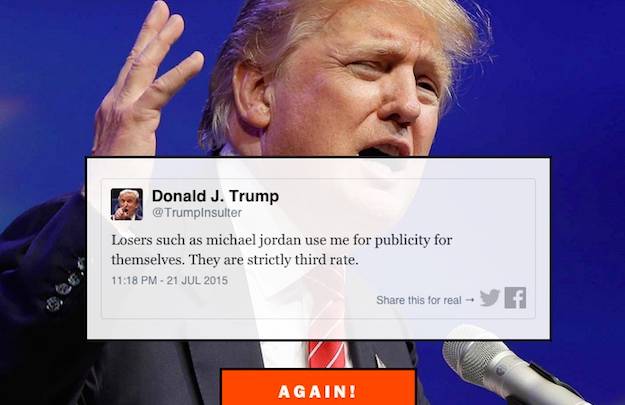 For anyone who has even casually followed the strange, winding, and often turbulent career of Donald Trump, it’s no secret that the Trumpsta has an affinity for doling out insults at any and everyone who dares speak out against him. Whether he’s taking on a politician like John McCain, a celebrity like Rosie O’Donnell, or even a producer on Modern Family, Trump is not one to pull any punches when heaving hyperbolic insults.

But why should Trump have all the fun when it comes to crafting nonsensical insults? Now, you too can put together head scratching insults in the vein of Trump’s own peculiar style. Over the past few days, a few Donald Trump insult generators have popped up, and two in particular are worth highlighting.

First, head on over to TIME where you can enter in a name of your choosing and then sit back, relax, and let the insult generator do all the work. I entered in “Michael Jordan” on a whim and the photo above is what came up. Not too shabby, Donald. Not too shabby.

Next, make sure to visit Mother Jones for an insult generator with some irreverent and hilarious results.

Below are two quick examples.

Here’s Trump taking on Mark Zuckerberg. Seems like a de-friending is in order.

Now Trump has truly gone too far. Tony Danza is a saint, a patriot even! Has Trump already forgotten about Danza’s seminal work on Who’s the Boss?.