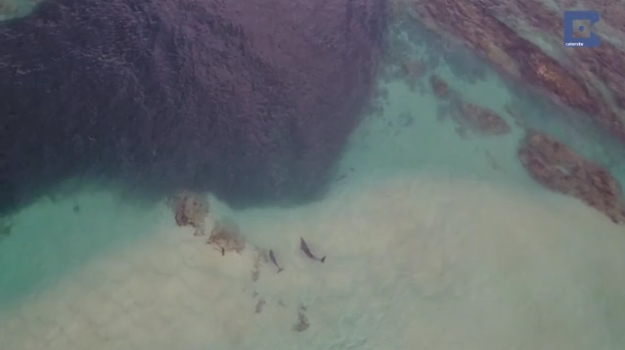 Dolphins are some of the smartest creatures on the planet but a lot of their brainpower goes toward figuring out ways to get their next meal. The following video shot from high up in the sky shows us how dolphins don’t just hunt for themselves but teach their children to hunt for food as well.

The impressive feat was caught on tape by mistake by German photographer Benjamin Macht, who was looking to find migrating humpback whales near Broken Head, New South Wales, Australia.

However, Macht quickly discovered seabirds in large numbers feeding on fish close to the shore. To his surprise, he then noticed the family of dolphins taking aim at the same large bait ball of fish.

The adult dolphin swims into the crowd of fish, using the tail to strike and stun the fish, which become defenseless prey. The young repeat the same technique over and over.

“I was there for over three hours, and the dolphins repeated this scenario numerous times in that time,” Macht told the Express. “It was truly spectacular to see how these smart animal hunt their food. I’ve never witnessed this before and to me it was quite special.”

The full video showing the dolphins in action follows below.