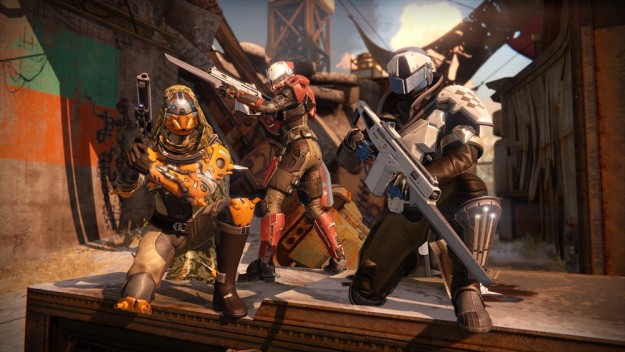 As revealed during Sony’s E3 press conference last week, Destiny is going to be chock full of exclusive content for PS4 and PS3 owners at launch. PlayStation VP Adam Boyes didn’t have enough time to share every detail during the show though, so social media manager Sid Shuman has taken to the PlayStation Blog to outline all of the PlayStation exclusives.

The first piece of exclusive content is a three-player cooperative mission called the Dust Palace Strike. You and a group of friends (or strangers) “will track a Cabal extraction team through the husks of an ancient human skyscraper, the Dust Palace, buried in the shifting dunes of Mars and face a new enemy, the Psion Flayers.” PlayStation owners will also be able to play on the Exodus Blue multiplayer map in the Crucible, Destiny’s competitive arena.

Any exclusive content pack wouldn’t be complete without weapons and armor, so expect three pieces of gear, one each for the Warlock, Titan and Hunter classes. There will also be two weapons, the Monte Carlo assault rifle and Hawkmoon hand cannon, along with three uniquely outfitted ships.

If you missed out on the PS4 alpha test this weekend, don’t worry — a larger beta is coming for the PS3 and PS4 on July 17th. Destiny will be available for both PlayStation consoles, Xbox 360 and Xbox One on September 9th.