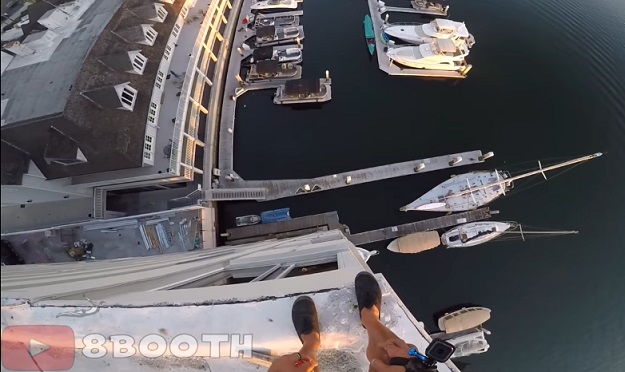 You may not have heard of 8Booth, but you’ve likely seen some of his exploits floating around the web in recent months. You see, 8Booth has a pretty bad and dangerous habit of jumping into varied bodies of water from heights that would make even the most seasoned of roller coaster riders squeamish. While some call him a daredevil and others are quick to claim that he must have a death-wish, what’s not up for debate is that 8Booth’s videos are positively insane.

If you’ve never seen a compilation of 8Booth’s greatest hits, we’ll drop some classics for you in a bit, but first, there are some new gems worth taking a look at. In a new video uploaded just yesterday, our fearless jumper takes to a roof in Mexico whereupon he throws caution to the wind and jumps into a pool not stationed directly below him.

Indeed, what makes 8Booth’s jumps so thrilling is that doesn’t just step off of a ledge and and peacefully drop straight down into water positioned below him. On the contrary, he seems to have a thing for jumping into pools that are stationed a few horizontal feet away from his jumping-off spot, requiring him to jump outwards.

In another video uploaded this week, also from Mexico, 8Booth performs a night jump.

What’s that you say? You want to see some more of 8Booth’s most dangerous jumps? Alright, ask and ye shall receive.

This clip below went viral about a month ago and has amassed more than 6.7 million views in four weeks.

This video below might be the most ridiculous of all, with 8Booth slightly hitting a cliff during a jump performed out in Southern California.