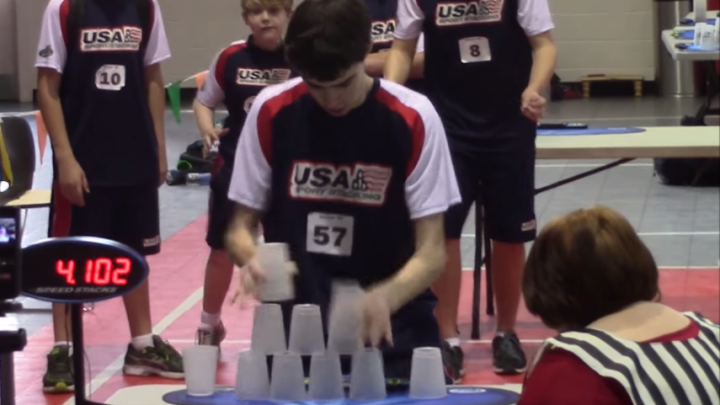 RELATED: Solving a Rubik’s Cube in 5.6 seconds makes you feel like a total boss

So what does competitive cup stacking involve? So you start out with three piles of plastic cups on a table, arranged like this:

Once the timer starts, your goal is to stack all three piles into three perfectly symmetrical pyramids as quickly as you can, like this:

Then you take down those pyramids just as quickly and put the cups back into piles. But you’re not done yet: Next you’re going to re-stack all the cups into two equally sized pyramids…

…and then when you take that pyramid down, you’re finally done.

OK, so now that we understand the entire process, what’s it look like in real time? Like this (note that the record-breaking trial starts at the 45-second mark):

So, yes: Competitive cup stacking is a real thing and it’s surprisingly exciting to watch, although I don’t think I could take hours of it on end.