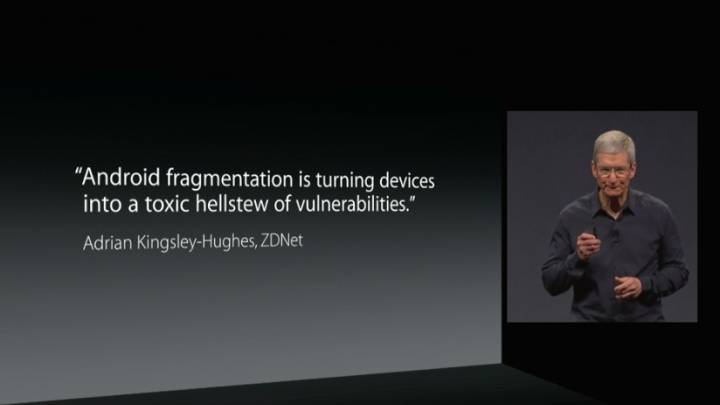 Apple and Google may have inked a truce when it comes to patent trials, but the two companies remain fierce rivals in the mobile and tablet businesses, and the iPad maker clearly had fighting words for Google during its WWDC 2014 opening keynote.

Cook revealed Apple has sold well over 800 million iOS devices to date – including over 100 million iPod touch units, over 200 million iPads and over 500 million iPhones – with 130 million of them being sold last year alone. Many of those Apple customers were switching from Android, Cook revealed in no uncertain terms.

“Over 130 million customers who bought an iOS device in the past 12 months, were buying their first iOS device,” Cook said. “Now, many of these customers were switchers from Android.”

“They had bought an Android phone… by mistake,” Cook added, igniting the crowd in attendance, “and then sought a better experience, and a better life, and decided to check iPhone and iOS.” Cook went on to say that nearly half of Apple’s customers in China in the past six months came from Android.

Further comparing iOS to Android, Cook said that while iOS 7 is currently installed on over 89% of existing devices, Google’s KitKat is only available on 9% of the current Android base. The exec said that Apple’s practice of making iOS available to as many customers as possible is one of the things that makes iOS popular with its users.

Cook took another hit at Google for its fragmentation issues. “If you look at a broader group, over a third of [Android] customers, are running a version of Android from four years ago,” Cook said. “That’s like ancient history.”

“That means these customers are not getting great new features. They’re not able to run your latest apps,” he told developers in the audience. “And they don’t get security updates they may need to stay safe.”

Cook also addressed another issue Android is popular for, malware. “Android dominates the mobile malware market,” the exec said, because of its fragmentation.

“No wonder experts are saying things like this,” Cook said, quoting ZDNet’s Adrian Kingsley-Hughes: “Android fragmentation is turning devices into a toxic hellstew of vulnerabilities.”

In addition to Cook’s direct attacks at Android, Apple also hit Google indirectly via some of the products it launched. The company significantly improved its Spotlight search feature on Yosemite and iOS 8 to deliver more results to the user, without requiring an obvious middleman such as Google Search, and even gave prominent placement to Microsoft’s Bing auto-translate online service while introducing iOS 8 on stage. Apple mentioned on its website that DuckDuckGo, which will be available to Apple users, is a search engine that doesn’t track users, while Microsoft confirmed that Bing will actually be the default search engine for both Yosemite and iOS 8.

Finally, and probably even more important than other moves, are Apple’s announcements for developers. The company has introduced several new tools and features that should help developers stay motivated in creating apps for iOS first – Apple introduced new App Store features to help with app discovery and app sales, but also new programming tools to help game creators come up with console-like games for its mobile devices. Earlier, Apple revealed its App Store now has over 1.2 million apps, which have been downloaded more than 75 billion times. Over 300 million users visit the App store each week, Cook also said.