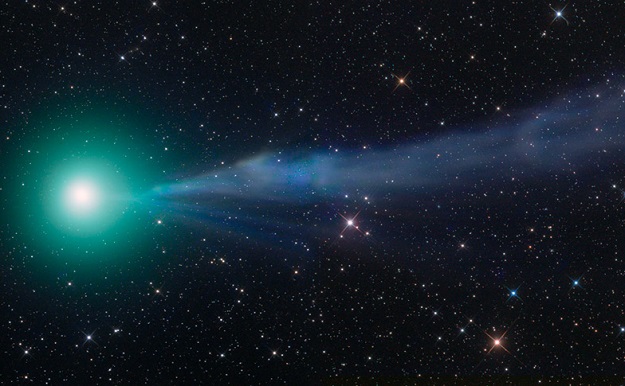 If you’re looking to get some booze on the cheap, you might want to consider visiting comet Lovejoy. A team of scientists recently discovered that the comet, as it traverses through the galaxy, is emitting ethyl alcohol, the very same kind that can be found in alcoholic beverages.

“We found that comet Lovejoy was releasing as much alcohol as in at least 500 bottles of wine every second during its peak activity,” said Nicolas Biver of the Paris Observatory, lead author of the team who recently published the findings in Science Advances.

In addition to alcohol, scientists discovered that the comet is also spewing out 21 different organic molecules along with the simple sugar glycolaldehyde. As a result, comet Lovejoy provides the first evidence that comets are capable of carrying complex organic molecules “necessary for the emergence of life.”

NASA’s press release on the matter reads in part:

Comets are frozen remnants from the formation of our solar system. Scientists are interested in them because they are relatively pristine and therefore hold clues to how the solar system was made. Most orbit in frigid zones far from the sun. However, occasionally, a gravitational disturbance sends a comet closer to the sun, where it heats up and releases gases, allowing scientists to determine its composition.

Comet Lovejoy (formally cataloged as C/2014 Q2) was one of the brightest and most active comets since comet Hale-Bopp in 1997. Lovejoy passed closest to the sun on January 30, 2015, when it was releasing water at the rate of 20 tons per second. The team observed the atmosphere of the comet around this time when it was brightest and most active. They observed a microwave glow from the comet using the 30-meter (almost 100-foot) diameter radio telescope at Pico Veleta in the Sierra Nevada Mountains of Spain.

While The Martian might have made made space travel seem less than appealing, something tells us that free alcohol by the ton might have the opposite effect. Make sure to hit the source link below for the full recap of the team’s findings.