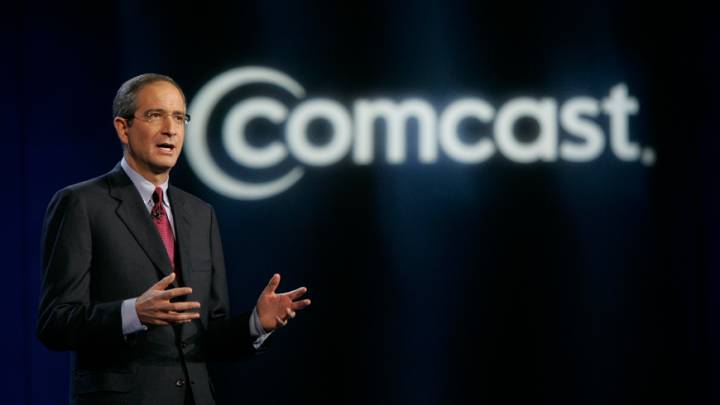 Comcast is a bit of a wounded beast right now. It’s still smarting from a pair of embarrassing defeats over net neutrality and its failed Time Warner Cable merger. Not to mention, its reputation remains in the gutter after several instances of its poor customer service went viral thanks to customers who recorded their phone calls with the cable giant. But you can’t keep a good corporate super villain down, which is why I’m not surprised to hear speculation that Comcast will make a big splash in the wireless market by buying T-Mobile.

Re/code reported earlier this week that Comcast has “notified Verizon it intends to exercise its option to resell cellular service using the carrier’s network,” which is the first major move the company has made to get into the mobile business so far. However, New Street Research analyst Jonathan Chaplin tells Re/code that Comcast almost certainly has more ambitious plans than just piggybacking on Verizon’s spectrum holdings.

“We would guess that Comcast will test a Wi-Fi first offering first using Verizon and see how it performs,” Chaplin explained. “Before rolling it out commercially I would assume they will see if they can get a better deal out of T-Mobile and Sprint, similar to Google’s (Fi service). At the same time, we wouldn’t be surprised if they take a hard look at buying T-Mobile.”

While Chaplin’s analysis is merely informed speculation at this point, there are many reasons why Comcast buying T-Mobile is entirely plausible. First, we know that T-Mobile parent company Deutsche Telekom has been trying to unload the “Un-carrier” from its books for years and has tried to sell it to both AT&T and Sprint parent company SoftBank. It’s also much harder to make a case that Comcast buying T-Mobile would hurt the competitive landscape of the American wireless industry since Comcast wouldn’t be eliminating a competitor and because it could argue that it would give T-Mobile more resources to compete than what DT is giving it.

None of this means that a Comcast-T-Mobile merger would be good for consumers, of course. T-Mobile has been a fiercely innovative company when it comes to finding creative ways to deliver more value to customers. From early-upgrade smartphone plans to paying off early rivals’ termination fees to rollover data plans, T-Mobile has been leading the way with initiatives that have made the wireless industry more competitive.

This is, as we all know, not how Comcast goes about its business. Comcast has traditionally been about setting up a local monopoly, lobbying local regulators to help keep competition away and then watching the money pile up. The competitive DNAs of Comcast and the current version of T-Mobile are completely different and it’s hard to imagine T-Mobile being as aggressive with its “Un-carrier” moves if Comcast is in charge.

But if Comcast decides it’s going to go all in on buying T-Mobile, I can’t imagine much that could be done to legally stop it. In short, acquiring the “Un-carrier” might be Comcast’s perfect act of revenge.