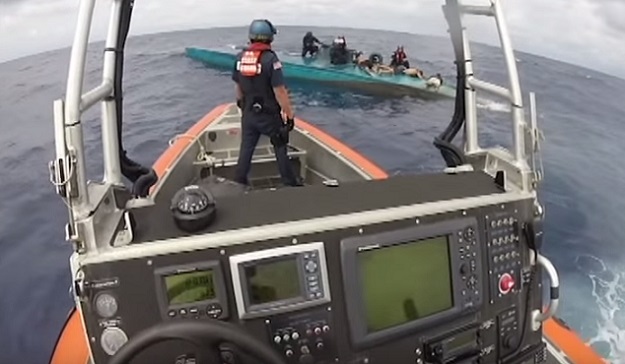 Smugglers have a storied history when it comes to crafting clever and ingenious ways to conceal drugs and sneak them across ostensibly secure borders. Back in the early ’90s, cartels out of Columbia were the first to add a layer of technical sophistication to their drug smuggling activities when they began manufacturing small submarines designed to transport cocaine across International waters while avoiding detection. Since then, the technical capabilities of what are often referred to as narco-submarines have only increased. Some rigs have elaborate communications systems built-in and can sometimes cost upwards of $1 million to construct.

Just a month ago, the U.S. Coast Guard tracked and captured a narco-sub located about 200 miles south of Mexico. Upon boarding the ship, authorities discovered a whopping 16,000 pounds of cocaine with an estimated street value of $181 million. The Coast Guard was able to seize 12,000 pounds of the white powder before the submarine itself began to sink.

The sub caught on the 18th was classed as a “Blue Semi-Submersible” which has been a cartel favorite for years. It runs right below the waterline, with just its exhaust, air stack and tiny wheel house sticking out up from the waterline.

Over the weekend, the U.S. Coast Guard put out a video documenting the capture of the narco-sub.

All in all, some pretty intriguing video which underscores the lengths to which drug smugglers will go to get their contraband to and fro. Not too long ago, we covered how drug smugglers had recently hollowed out and battery-powered surf board, loaded it up with $100,000 worth of meth, and sent it on its way. Ultimately, water seeped into the surf board causing it to wash up on shore, unclaimed.