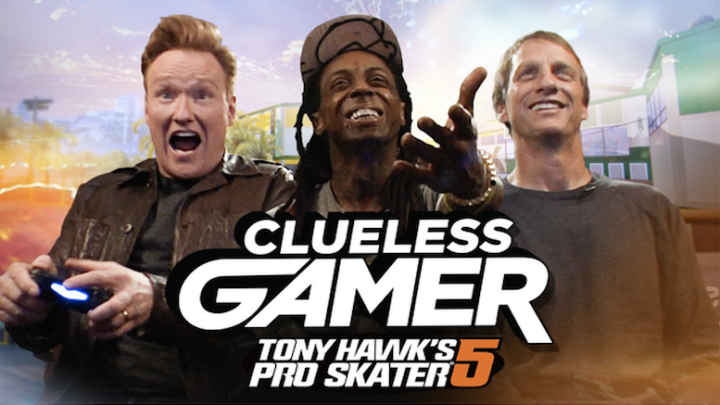 It’s been months since the last Clueless Gamer segment on Conan’s TBS show, but now that the holiday release season is beginning to pick up, don’t be surprised to see a lot more of Conan in the coming weeks. On Wednesday, Conan had a chance to sit down with Lil Wayne and Tony Hawk to check out the upcoming sequel, Tony Hawk’s Pro Skater 5.

If you haven’t kept up with the Tony Hawk series, there have been plenty of spin-offs over the past decade, but the last official entry in the Pro Skater series came in 2002 on the PlayStation 2. It’s been 13 years since we had a THPS game to look forward to, but later this month, we’re finally getting a new sequel.

If you’re looking for an extensive preview of the game, you might want to check elsewhere, but seeing these three individuals is worth the price of admission, even if you don’t come out of it with any understanding about how the game works.

Tony Hawk’s Pro Skater 5 will release for PS4 and Xbox One on September 29th, and then for PS3 and Xbox 360 on November 10th. Watch the Clueless Gamer segment below: