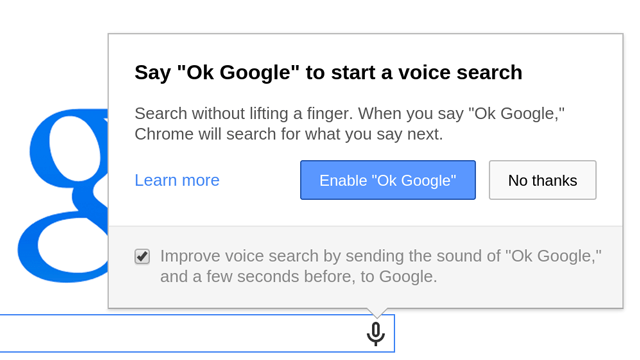 Siri still has plenty of issues that need to be ironed out in order to help improve usability, but one thing is certain: Apple kicked voice controls into high gear with Siri’s debut. Now every smartphone and tablet maker includes voice controls in devices, and consumers are growing accustomed to having voice controls as an option.

Of course, voice controls aren’t only useful on smartphones and tablets.

Late last year, Google released a Chrome browser plugin for OS X and Windows that allowed users to perform a hands-free Google search simply by speaking the phrase “OK Google.” A short while later, Google offered this nifty voice search feature as a built-in option for Chrome users who are members of Google’s beta testing program.

Now, Google has announced on Google+ that its “OK Google” voice search feature is rolling out to all users in the latest version of its Chrome browser.

“With the latest release of Chrome, all Chromies can now search by voice in Chrome,” Google wrote in the post. “Just open a new tab or visit Google.com, say ‘Ok Google’ and take it for a spin.”