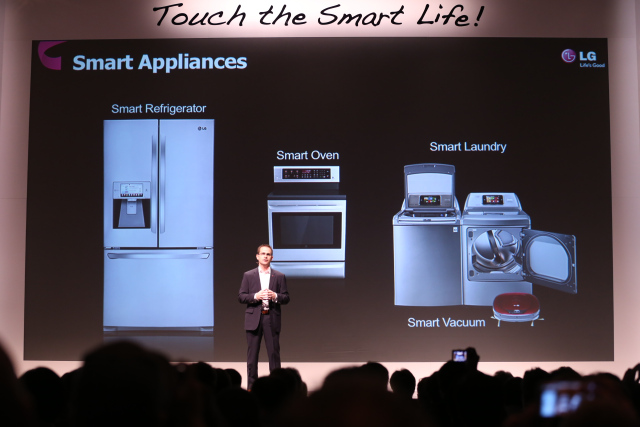 Las Vegas is a much better place to be in January than Boston, and I’ve typically had fun covering CES in the past. I skipped it this year, however, and after taking a look at all the “big” announcements unveiled by major tech vendors at CES 2013, all I can say is, “Thank God I’m stuck freezing in Massachusetts.” Let’s put it like this: If the most exciting announcements at your electronics trade show are a Sony (SNE) Xperia phone and a Samsung (005930) chalkboard, then you have failed horribly at convincing major tech vendors that you’re a worthy launching pad for their best new products.

Take a look at LG (066570), for example. The company seems dead set on closing the gap with rival Samsung this year when it comes to releasing popular, top-notch smartphones and tablets that can go head-to-head with the wide range of Galaxy-brand devices launched every year. And yet, LG decided to kick off its big revival year at CES by announcing… the Smart Vacuum. This isn’t to say that LG has no hot new smartphones on the horizon, mind you, it’s just that the company is saving those devices for the Mobile World Congress show in Barcelona next month.

Speaking of Samsung, we didn’t get any big-name smartphones or tablets from the world’s top Android vendor either. Oh, we got an 85-inch chalkboard television that roughly twenty-three people will be able to afford, but we didn’t get any word of the Galaxy S smartphones or Galaxy Note phablets that have transformed the company into a mobile industry powerhouse. In all likelihood, Samsung will save news about its mobile devices for Mobile World Congress and its own special press events, because it sure isn’t showing them off at CES.

And this is CES’ major problem nowadays — its reputation has become so diminished over the years that no one wants to actually make news there for fear of being quickly overshadowed by Mobile World Congress, or by Apple (AAPL) and now Microsoft (MSFT) holding their own major product launches.

And the situation is getting worse too, since last year’s CES was at least notable as the big coming-out party of ultrabooks. Sure, ultrabooks have largely flopped but at least they were more exciting and relevant to most tech enthusiasts than a smart fridge.

If current trends keep up, CES may soon be reduced to showing off Android-powered Shake Weights as its big news.[bgr-post-bug]