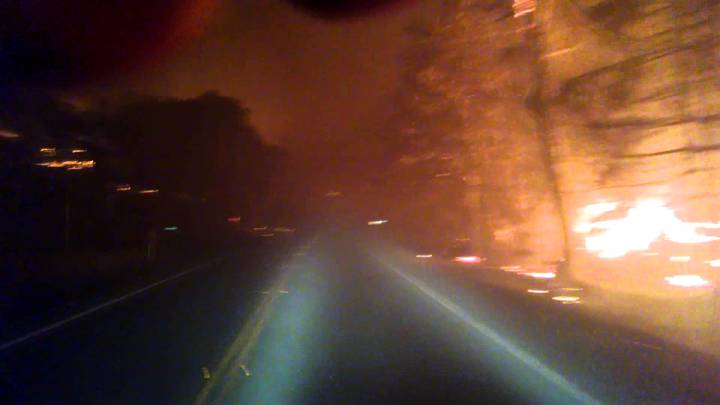 Unless you live in California, it can be difficult to imagine just how dramatic the effects of the drought have been. Recent reports are calling this the worst drought in 500 years, and the implications reach much further than simply forcing Californians to limit the amount of water they use to keep their lawns green.

What you’re about to watch is a video from YouTube user mulletFive as he escapes the Anderson Springs community in Lake County, California as it literally burns to the ground around him. CBS News says that nearly 23,000 people have been displaced since the wildfires began and around 750 homes have been destroyed.

In the comment section below the video, one commenter expressed sympathy and relief for the survivors, but noted that those behind the video waited far too long to evacuate. Here’s the response from the video’s creator:

“Fully agreed, we did wait way too long to get out. We are the last house at the very back of the Springs, down in a gulch. There was no smoke or ash coming our way, and there were no sirens or air support nearby, so we honestly didn’t know how close it was. Once we drove up out of our gulch, we realized how close it was. There were no sirens or air support because there was zero firefighting effort in Anderson Springs. (This is NOT a dig at the firefighters, by the way! There was just way too much fire in every direction, and they didn’t have the resources to send to Anderson Springs.) So anyway, that is how we ended up leaving WAY too late. In retrospect, we should have gone out for a drive to find out what was going on, but we were a little preoccupied with packing. Thanks for your comments!”

This extensive explanation really puts the situation into perspective. The resources to handle wildfires as destructive and fast-moving as the ones currently blazing across Northern California are spread too thin to keep everyone safe. It’s up to residents of the area to be as cautious as possible and not take any chances.