The following chart, via Cordcutting.com, illustrates how the monthly cable bill in the United States has been trending upwards for years. 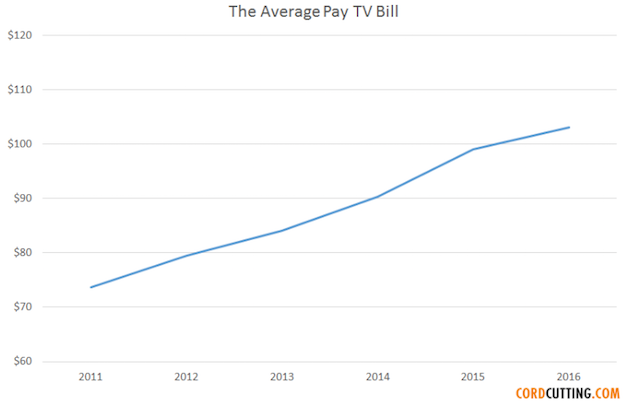 In turn, it’s not surprising that the research also divulges that the percentage of U.S. households that have a monthly cable bill is 82%, down from 87% just five years ago.

Funny enough, it appears that The Onion’s classic story about how U.S. cable companies are just going to arbitrarily charge consumers $100 has essentially become a reality.

Offering no justification for the action aside from their own desire to do so, executives from the nation’s leading cable companies announced plans Wednesday to take $100 from every one of their subscribers.

Now as to why we’ve seen a marked increase in cable prices over the years, there are a few theories worth mentioning.

One, cable companies have become increasingly adept at luring in subscribers at very alluring prices and then jacking up the subscription costs 18-24 months later. Two, cable subscribers are now willing to pay more for features that were perhaps not deemed to be “necessary” just a few years ago, with DVR subscriptions and HD feeds being two prime examples. Three, as easy as it is to hate on big cable companies, some are offering users a lot more bang for their extra buck with respect to features like On-Demand and mobile viewing options. To that end, some consumers may not mind spending more because they feel like they’re getting more in return.