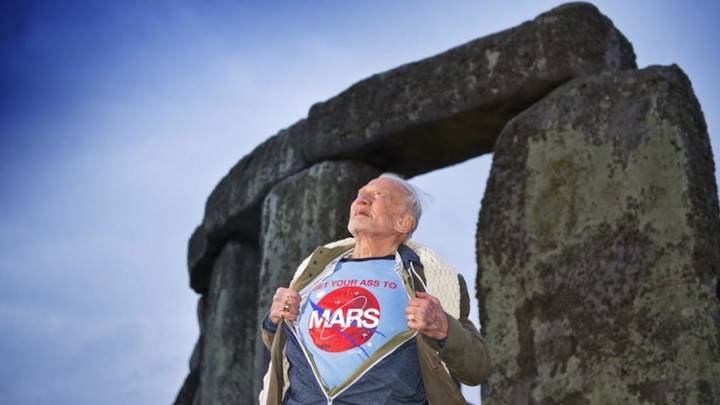 When it comes to moon travel, astronaut Buzz Aldrin has already been there and done that. As the second man to ever walk on the moon, Aldrin these days has his eyes set on a bigger goal and an even tougher challenge: Mars.

Indeed, the moon is seemingly old news nowadays, what with people like Tesla and SpaceX CEO Elon Musk championing the need to colonize mars.

In any event, Aldrin on Monday morning took to Twitter where he tweeted an incredible photo for the ages. What made an already cool photo that much more amazing is that it was taken at Stonehenge.

Aldrin may very well be the coolest 85 year old on the planet.

As for the “Get your ass to Mars” slogan on his t-shirt, Aldrin has for years now been a vocal proponent of establishing sustainable settlements on Mars. In fact, Aldrin owns a number of shirts with the exact same not-so-subtle slogan.

And lest anyone think Aldrin is a late comer to the colonize Mars game, he’s been at it for decades. Below is a photo of Aldrin in 1963 training for a NASA physical.

And oh yes, he also knows how to throw a crisp right cross.