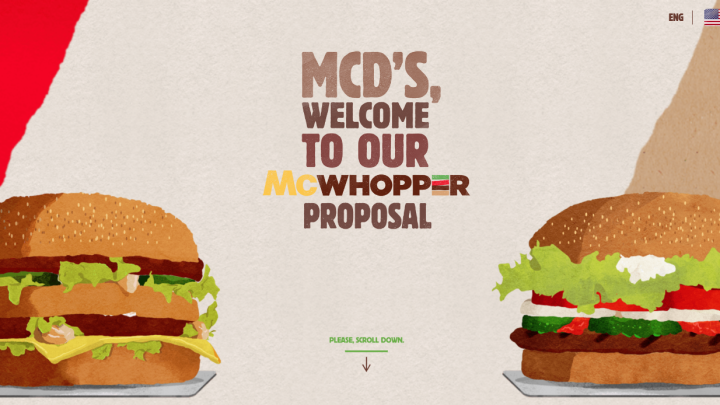 Other than Coke-vs.-Pepsi, I can’t think of a fiercer food company rivalry than McDonald’s-vs.-Burger King. Because of this, I was astounded to see that Burger King has asked McDonald’s to join it in creating a super sandwich to celebrate International Day of Peace called the McWhopper.

“Burger King genuinely wants to unite with McDonald’s on September 21st, 2015 to prepare and serve the McWhopper to get the world talking about Peace Day,” Burger King writes on the McWhopper website.

Burger King has several different ideas for how to execute this plan, including having the McWhopper available in one pop-up store in Atlanta, which just happens to be the midway point between McDonald’s headquarters in Chicago and Burger King’s headquarters in Miami. The company has even put together a proposed burger that would combine the Big Mac and the Whopper into one gigantic burger that will be known as the McWhopper (I assume the marketers wisely considered and rejected the title “Big Whop” for this project).

Personally I think this is an amazing idea. And to help these two companies come together, I’ve even written a little jingle that’s reminiscent of a certain Coke ad from the ’70s:

And get clogged arteries

And pretend it helps world peace.”

You get the idea. McDonald’s has so far been cool to the idea but there’s still a chance they’ll come around. For world peace, it will be worth it.