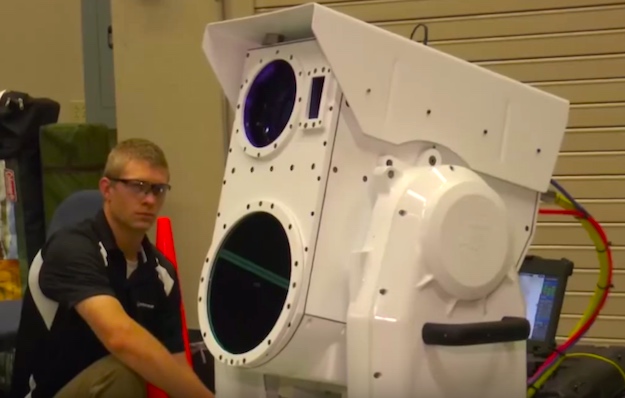 Drones are everywhere these days. They’re at your local park, they’re in the ocean, they’re hovering over the White House lawn, and they may even be hovering overhead armed with tear gas.

In a world that’s becoming increasingly drone friendly, there are some serious safety considerations that shouldn’t be ignored. Specifically, government and military officials have cautioned that drones might soon be outfitted with explosives or chemical weapons and flown into either public or sensitive spaces.

With that in mind, Boeing recently developed a portable laser cannon that can eviscerate unwanted and pesky drones mid-flight. In the future, these types of lasers might be installed in all sorts of locations, including airports and sensitive military installations.

This past Wednesday, Boeing showed off its high-tech laser in New Mexico, and Wired was on hand to get an up close and personal look at this futuristic device.

In the demo, Boeing used the laser to burn holes in a stationary, composite UAV shell, to show how quickly it can compromise an aircraft. Two seconds at full power and the target was aflame. Other than numerous safety warnings to ensure no one was blinded by the two-kilowatt infrared laser, there was no fanfare. No explosions, no visible beam…

Instead of a massive laser mounted on a dedicated truck, the compact system is small enough to fit in four suitcase-sized boxes and can be set up by a pair of soldiers or technicians in just a few minutes. At the moment, it’s aimed primarily at driving drones away from sensitive areas.

What’s particularly impressive about the laser is that it’s insanely precise. Not only can it hone in on a drone, it gives operators the ability to target specific portions of the drone to within an inch. Whether you want to destroy a drone completely or perhaps just burn off a wing as to capture it, Boeing’s laser has you covered.

As far as range goes, Boeing representatives told Wired that if a drone can be seen with binoculars, it’s vulnerable to attack. Aside from its functionality, Boeing’s laser cannon is intriguing because its relatively cheap and easy to operate. Once it’s up and running, the only real cost is powering it with electricity and it can be operated by just one person.

Make sure to hit the source link below for the full scoop on this futuristic and seemingly Star Wars inspired anti-drone laser.