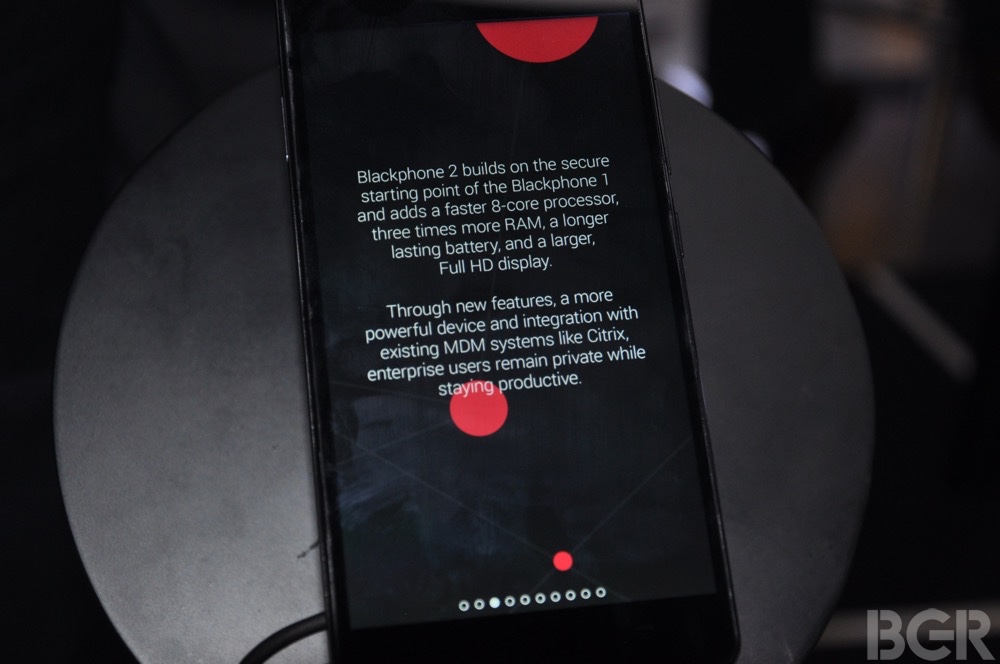 Silent Circle, makers of the most secure Android smartphone in the world, announced a bunch of new products on Monday at MWC 2015, including a new Blackphone 2 smartphone, a Blackphone+ tablet and special upcoming software features to further improve your privacy while you’re on a mobile device.

The Blackphone 2, which is coming at some point in the second half of the year and will be priced at $649 like its predecessor, will not only secure your digital life while using the phone, but it also promises to be a beast of an Android handset by packing some impressive specs.

The device was already on display at MWC 2015 where I was able to take some photos of it in action, though it wasn’t yet running the improved PrivatOS 1.1 mobile operating system that’s going to run on both the Blackphone 2 and Blackphone+. Instead, it was running a presentation that just listed its main specs and features.

The Blackphone+ tablet is still a prototype and not ready for public consumption, but I was able to see a glance of PrivatOS 1.1’s Spaces UI, which is the main feature of the upcoming OS release and is supposed to protect your security even better than the first-gen model.

With Spaces, Blackphone users will be able to create additional spaces on their devices to offer secure Android experiences in various instances. Think of them like secondary user accounts that have access to only some types of applications that should be better and safer than what Google is offering now with Android. For example, a space could be created for a child that would give him or her access to certain apps on the device while protecting his or her privacy and security.

Other features, such as a Silent Store (a privacy app store), Silent World (an encrypted calling plan) and Silent Manager (a system for managing plans, users and devices), have also been announced.

Hands-on images and the full press release follow below.

BARCELONA, SPAIN, March 2nd 2015 – Silent Circle today unveiled the world’s first enterprise privacy platform, a unique combination of devices, software and services, based upon and built from a fundamentally different mobile architecture – ZRTP. It includes the launch of the Blackphone 2 and the world’s first privacy focused tablet, Blackphone+.

“Enterprise privacy is similar to individual privacy. The same technologies can protect both,” Phil Zimmermann, Silent Circle co-founder said. “My own work in developing privacy technology has always been motivated by my interest in individual privacy as a human right. The recent Sony experience shows that enterprises too have a responsibility to up their game to protect the privacy of their own people and their partners.”

Bill Conner, President and CEO of Silent Circle, said, “Today we unveiled the vision to drive the second stage of growth for Silent Circle. Enterprises have been underserved when it comes to privacy. Traditional approaches to security have failed them. We’re here to fix that. We have to understand that to achieve real privacy now requires security plus policy. That new equation is driving everything we do in building the world’s first enterprise privacy platform.”

Reflecting the ways we all work have now evolved – with a growing number of employees now using personal devices to connect to their enterprise networks – the company has created a platform of devices, software and services that recognize traditional approaches to security are no longer enough.

Blackphone:
The first generation Blackphone was designed to be a secure starting point for your personal communications. Since it was launched 12 months ago at Mobile Congress 2014, the device has seen huge global demand, it was also recently named one of Time Magazine’s best 25 inventions of 2014.

Blackphone 2:
Arriving in the second half of 2015, Silent Circle announced the launch of Blackphone 2 which has been built to offer enterprises privacy without compromise. It integrates seamlessly with existing MDM systems like Citrix and also adds a faster processor, more RAM, a longer lasting battery, and a larger display. It offers the privacy and security that you can only get from Blackphone with the next-generation hardware performance that smartphone users demand.

PrivatOS
PrivatOS is an Android-based operating system that was created by Silent Circle to address modern privacy concerns. There is no software, no hooks to carriers, and no leaky data. It puts privacy in the hands of the user, without any sacrifice to your productivity.

PrivatOS 1.1 is the first major upgrade to the company’s OS. It introduces Spaces, an OS-level virtualization and management solution that enable devices to be used for all aspects of mobile life without compromising choice, privacy or ease-of-use. Geared specifically for the enterprise, it keeps enterprise and personal apps. Silent Circle are also introducing the capability that permits IT administrators to lock and wipe enterprise managed ‘Spaces’ when necessary, in addition to announcing MDM partnerships with Citrix, Soti and Good to pave the way for its increasing roll out within businesses worldwide.

Silent World
An encrypted calling plan that lets users communicate privately with those who don’t have Silent Phone. Silent Worlds allows users to call anyone within the Silent Circle coverage areas privately, with no roaming charges or extra fees.

“Traditional security solutions have failed global enterprise in a mobile world and make data and privacy breaches feel inevitable to most enterprises” said Mike Janke, Co-Founder and Chairman of the Silent Circle Board at a press conference held at Mobile World Congress 2015 this morning. “What’s more, these breaches have evolved and have much broader impact. They now put every customer, employee and partner at risk. They are eroding the trust people have in enterprises. They have moved privacy firmly to the top of the boardroom agenda.”