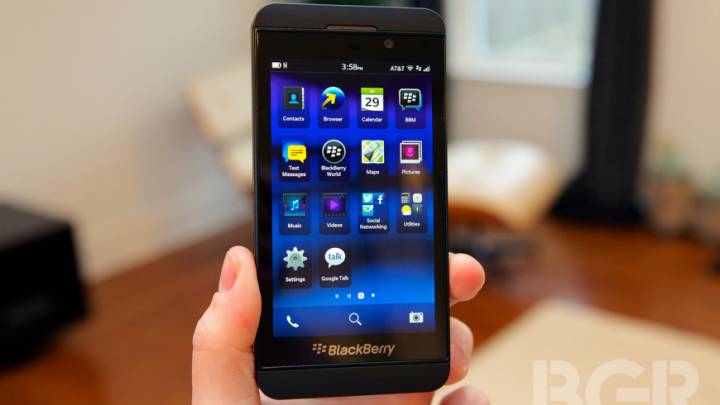 BlackBerry’s (BBRY) first next-generation smartphone launched in the UK last week and early demand seemed strong. A number of retailers reported stock-outs on day one, and BlackBerry UK general manager Stephen Bates said early sales exceeded all of its launch partners’ expectations. A potential problem may arise, however, if expectations weren’t very high to begin with — several new reports suggest early Z10 sales may not be as impressive as we thought.

A number of industry watchers followed up the BlackBerry Z10’s launch in the UK with customary checks at various retailers. While these checks did reaffirm earlier reports of widespread stock-outs, they also found that by and large, retailers didn’t have many Z10 handsets to begin with.

“Checks at 40 stores in Canada indicate sell-through of the BlackBerry Z10 smartphone is strong on its launch day, with numerous stores selling out towards the end of the day,” RBC Capital Markets analyst Mark Sue wrote in a note to clients on Wednesday. “Z10 pre-orders reached record highs (for BlackBerry).”

That’s the good news. Sue tossed some cold water on the report though, noting very short Z10 inventory across all of the stores he spoke with. “Supply appears limited, with stores allocated avg. 5-10 units/store for walk-ins and est. 20-30 units/store for pre-orders,” the analyst wrote.

Sue continued, “Sell-through of the BlackBerry Z10 in the UK is exceeding RIM’s expectations, with some stores sold out as well. The Z10 now ranks #4 on uSwitch UK’s website ahead of the Nexus 4 and Lumia 920 (#1 remains iPhone 5). BlackBerry will launch the Z10 in other parts of Western Europe this week. Bear in mind however, BlackBerry’s presence in those countries combined is less than its sub base in the UK.”

Fellow Canadian firm Canaccord Genuity found much of the same. “Our U.K. store surveys post the recent launch of the Z10 smartphone indicated solid initial sales. However, limited initial supply was cited as the reason for early post-launch stock-outs at some carrier stores versus overwhelming demand,” analyst T. Michael Walkley wrote in a separate note to investors on Wednesday. “In fact, our surveys indicated most stores received less than 15 units and sold a majority of these units over a two- to three-day period, leading to initial stock-outs at a few stores and low inventory levels at others.”

He continued, “While we are impressed with the features of the new BB10 OS and Z10 smartphone, we believe BlackBerry has only closed the gap with more mature smartphone OS platforms and offers limited differentiating services or features to win back customers from more mature ecosystems.”

Over at Pacific Crest, analyst James Faucette agrees that the BlackBerry Z10 is in short supply but he thinks this is no accident. “We have canvassed retailers across the United Kingdom for five days to develop a complete picture of the response to the BlackBerry launch,” the analyst wrote in a research note on Tuesday. “Our conclusion is that BlackBerry seems to be following a strategy of deliberate scarcity for the Z10, similar to what other manufacturers have done in recent high-profile launches.”

Faucette notes that BlackBerry might be headed down a bumpy road, however, as similar launches where vendors worked to manufacture demand regularly backfired.

“The launch of the Z10 has shown more early demand than other high-profile but ultimately severely disappointing launches in the past few years,” the analyst noted. “In those cases, there was excess inventory by the end of the first full quarter of shipments.” According to Faucette’s estimates, the BlackBerry Z10’s quarterly run rate will land between 100,000 and 150,000 units in the UK following the February quarter.

“The United Kingdom has accounted for approximately 10% of BlackBerry sales over the past few years, which implies global demand of roughly 1 million to 1.5 million units per quarter which we believe would be a disappointment,” Faucette added. “Further, we would note that given the Z10’s high price point, we believe the U.K. could end being a higher percentage of the global market for the Z10 than for BlackBerry overall.”

Whether or not BlackBerry is off to a fair start, RBC’s Mark Sue says that the biggest challenges still lie ahead.

“The toughest challenge for BB10 is re-gaining consumer smartphone share in the crucial US market,” Sue wrote. “So far so good, yet BB10 needs to overcome user lock-in to Android and iPhone content ecosystems. Samsung’s new GS4 may come earlier this year, as well as Apple’s refresh, making it an even tougher environment in the spring. Microsoft (MSFT) also surpassed BlackBerry in the US for the first time since 2006.”[bgr-post-bug]