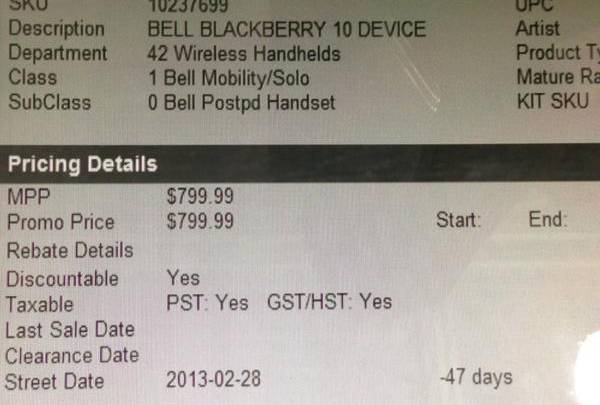 Research in Motion (RIMM) is scheduled to formally unveil its BlackBerry 10 operating system on January 30th, however it is unclear when we will see the first new BlackBerry smartphones launch. Despite the fact that all four major U.S. carriers — Verizon (VZ), AT&T (T), Sprint (S) and T-Mobile — have confirmed plans to carry new BlackBerry 10 devices in 2013, RIM has remained quiet regarding release details. According to an image provided to BGR and other publications allegedly showing Best Buy Canada’s (BBY) internal inventory system, the first BlackBerry 10 smartphone could launch in Canada on February 28th.

This specific release date concerns Canadian carrier Bell (BCE), though the phone will likely launch on additional carriers at the same time if the date is accurate.

When contacted by BGR for comment, RIM declined to confirm or deny the date. “We understand that there is a lot of excitement for BlackBerry 10,” a RIM spokesman told BGR via email. “We will launch the platform on January 30th and until then we won’t comment on speculation.”

RIM has previously said it will announce availability and pricing for its debut BlackBerry 10 devices at the launch event on January 30th.