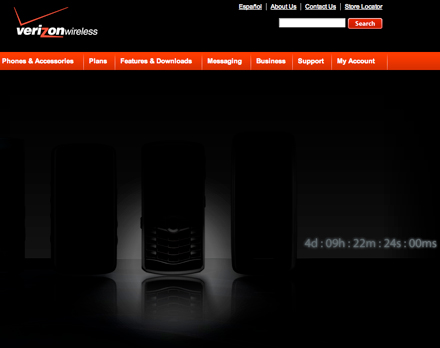 It appears the BlackBerry Pearl 2 (8130) along with the Samsung U470, LG VX8800, and LG VX10000 will be joining Verizon Wireless’ lineup come Wednesday morning. The carrier has posted a teaser site, in which mouse movements shine light upon dark silhouettes of four upcoming devices. Did you really expect Sprint to out beat Verizon with the BlackBerry Pearl 2? Ah, never mind. They got the Palm Centro…

UPDATE: We just got word from one of our Verizon ninjas, and they’ve informed us that the BlackBerry Pearl 2 release date on Verizon is in November. This leads us to believe that the images will be revealed on the teaser site in 4 days, perhaps?